8 June, 2016Unions are under severe pressure to defend workers from exploitation as employers take advantage of anti-union legislation.

When car manufacturer Renault cancelled union elections and fired workers at its plant in Bursa, Turkey, in February 2016, IndustriALL Global Union affiliate Birleşik Metal-İş sprang into action. The union stopped production and organized a peaceful demonstration to defend its members. The company responded by calling police, who used violence in an attempt to break the union.

Despite Renault signing a global framework agreement with IndustriALL, local management appeared determined to break the unionization of the plant at all costs.

This level of confrontation is not unusual in Turkey; employers are no strangers to violence, intimidation, illegal sackings and other underhand tactics. Unions do not take this lying down. The recent Renault dispute shows the fractious and sometimes violent industrial relations landscape.

Unions in Turkey face an uphill struggle in an increasingly challenging environment. After a period of strength and growing militancy in the 1970s, a military coup in 1980 lead to the severe repression of trade unions. The military government designed labour laws to discourage unionization, and DİSK, the Confederation of Progressive Trade Unions, and its affiliates were banned, and their executive committees arrested. They remained banned until 1992.

Erdoğan’s AK Party came to power in 2002, replacing military rule. A new Law on Trade Unions and Collective Labour Agreements was introduced in 2012 to supersede the old laws of the dictatorship, but it is still far from ILO standards.

As a result of this pressure, union density in the private sector has been reduced to three per cent. Turkish workers are at severe risk of exploitation and abuse.

The industrial homicide of 301 coal miners in 2014 at Soma is the most compelling argument for why Turkey needs strong unions. The Soma mine was a death trap and the accident was preventable: it only happened through a tragic confluence of greed, incompetence and corruption. The mine was owned by the government but run by a private company, an arrangement of semi-privatization that lead to a focus on profit before safety, while the government turned a blind eye to abuses.

To add insult to death and destruction, a further 2,800 Soma miners were fired by text message in the wake of the accident, and affiliate Maden-İş had to fight a serious battle for justice.

But the tragedy of Soma is just the tip of the iceberg: there have been 1,500 deaths in Turkish mines since 2000, and it took strong union pressure to get the government to ratify ILO Convention 176 on mine safety. For C176 to function, unions need to be able to operate freely, and workers need to be able to report safety concerns and refuse dangerous work.

Turkey is one of the world’s largest textile producers. The industry is dominated by small suppliers and is poorly regulated. Most textile workers earn the minimum wage of 1,647 lira (US$ 570) per month, which is far below a living wage in Turkey. Many workers are unregistered, vulnerable to exploitation and not paid even the legal minimum. It is not unusual to find child labour.

Many premium brands – including Hugo Boss, Mulberry, Benetton, Ermenegildo Zegna and Prada - use Turkish suppliers. But premium brands are not above turning a blind eye to labour exploitation if it lowers production costs: workers making clothes for Hugo Boss in Izmir were paid far below a living wage and were sacked for joining the union Teksif.

Workers making luxury Mulberry handbags – which retail for up to a thousand dollars – were sacked for joining the union Deriteks. IndustriALL launched an international campaign against the brand to support them, forcing the Turkish supplier to recognize the union.

Regional conflict and the exploitation of refugees

Turkey is on the front line of a humanitarian crisis. The civil war in Syria has lead to the influx of more than two million refugees, of which about 400,000 work in Turkey, mostly in agriculture, construction and the textile industry.

Refugees are vulnerable to exploitation. Pressure by unions and civil society has led to a change in Turkish labour law, allowing some refugees to work legally. Also, the global framework agreements between IndustriALL and clothing giants Inditex and H&M mean that pressure can be placed on suppliers to treat refugees fairly.

The civil war in Syria is having an effect on Turkey, which has intervened heavily on the rebel side. Daesh, the Islamic State movement, has exploited divisions in Turkey by launching a number of bombing attacks within the country, particularly against secular, democratic and progressive forces.

In the meantime, there are also workplace level thresholds of 50 per cent, and for companies with more than one workplace it is 40 per cent.

According to the legislation, employers can easily file a complaint at the local court claiming that the union concerned does not have sufficient majority to be a bargaining partner. It is common practice amongst Turkish employers to get rid of union presence at the workplace, or at least to stall the collective bargaining process.

FREEDOM OF ASSOCIATION UNDER THREAT

Even though Turkey has ratified ILO conventions on the freedom of Association and Protection of the Right to Organize, fundamental trade union rights remain under pressure.

Turkey’s constitution is clear that “employees have the right to form labour unions without obtaining permission, and they also possess the right to become a member of a union and to freely withdraw from membership, in order to safeguard and develop their economic and social rights and the interests of their members in their labour relations.

No one shall be forced to become a member of a union or to withdraw from membership.”

According to the criminal code, violating the freedom of work and labour and preventing trade union rights can be punished. The reality however, is different. 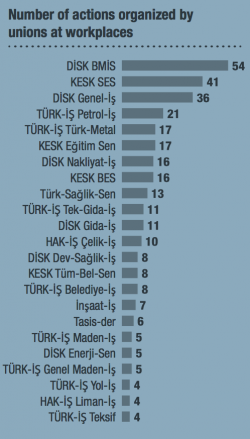 Right to strike – only on paper

Turkey’s labour law allows for lawful strikes and lockouts to be postponed by 60 days if it is “prejudicial to public health or national security”.

The law also says that “if an agreement is not reached before the expiry date of the suspension period, the High Board of Arbitration settles the dispute upon the application of either party within six working days. Otherwise, the competence of the workers’ trade union shall be void.”

In reality, the postponement is actually a ban, as it is impossible to continue to strike after the 60-day period.

The Turkish parliament is currently debating a draft bill proposed by the government giving private employment agencies the right to hire workers in a range of sectors. If passed, the new law would entail a huge shift in the labour market from permanent to short-term contracts, allowing the widespread use of precarious employment contracts.

The draft bill would allow companies to use agency workers as a percentage of the total workforce in particular circumstances. Turkish unions argue that this could lead to an excessive use of agency work due to “unforeseen increase in the business volume of the enterprise” or “periodical business increases”, which employers could argue exist at any time in a production system.

A parliamentary commission has endorsed the draft bill, and the bill is expected to come up for consideration at the Grand National Assembly (TBMM). If enacted, millions of workers will end up with agency work contracts rather than permanent ones.

Fighting back against precarious work

Outsourcing, with lower wages and poorer working conditions in comparison with permanent workers, has become a big threat to union density, collective bargaining and solidarity among permanent and contract workers.

Another affiliate, DİSK-Tekstil achieved an unprecedented step forward at Greif Enterprises, an American packaging company, by making more than 1,200 contract workers permanent through an agreement between the union and the company.

Hugo Boss has put up every possible barrier to union organizing at its most important production factory in Izmir. Management ruthlessly sacks key union members, which they have been found guilty of in Turkey’s High Court of Appeals.

The Turkish Union of Textile, Knitting and Clothing Industry Workers, TEKSIF, an IndustriALL affiliate, has been supporting Hugo Boss workers to organize for over three years. The workers, the vast majority of whom earn less than the poverty threshold with long working hours, discretionary overtime and no social benefits, are seeking a living wage and a voice at work.

Whilst Hugo Boss publicly claims to uphold internationally recognized labour standards throughout its global operations, the 3,000 workers in Izmir have had their fundamental rights at work attacked by management.

Violations include targeting of union supporters and their family and close friends through threats, punishments and sackings. It took long drawn-out court processes to prove 20 illegal sackings of trade union supporters between 2011 and 2014, while a further eight are still pending in court. Although the High Court of Appeals confirmed that those workers were dismissed because of their union membership and ordered their reinstatement, management took an option open under the law to pay them an extra compensation instead.

The union organized more than 50 per cent of Standard Profil’s 2,300 Turkish workers from the plant in Düzce and a sister factory in Bursa, and gained formal certification of recognition.

Nevertheless the company then engaged in legal challenges to the certification in an effort to block workers from their legitimate workplace rights and sacked union activists inside the larger Düzce factory during the organizing period.