24 May, 2016Since it’s founding in 2012, action against precarious work has been at the top of IndustriALL’s policy and campaign agenda. After four years of organizing, bargaining, campaigning and fighting legislation by IndustriALL affiliates across the globe, the occasion of IndustriALL’s second Congress is an opportunity to reflect on the achievements and refocus on the struggles still to come.

The rapid increase in precarious work is driven by both business and governments. Companies put flexibility as a condition for employment creation. In the name of economic growth, governments are deregulating the labour market and allowing the expansion of insecure and low quality jobs. In a globalized economy, with high level international competition and outsourced production processes, pressure is on cutting costs. Multinational companies have imposed a supply chain model which generates precarious work, particularly in sectors like textile or electronics. Technological changes enable employers to impose ever more flexibility and insecurity.

Fighting against precarious work: a key strategic goal for IndustriALL

At IndustriALL’s founding Congress in Copenhagen in June 2012, the campaign to STOP Precarious Work was unanimously adopted by IndustriALL affiliates.

In the name of this global campaign, unions committed to mobilizing their members on 7 October, the World Day for Decent Work.

The number of affiliates participating in the global day of action increases every year, which is both a testament to the priority that affiliates put on the need to stop precarious work, and a very visible demonstration of IndustriALL’s determination to stamp out abusive employment contracts.

The continuing expansion of precarious work is one of the biggest threats that unions face, not only to workers’ job security, pay and working conditions but to their capacity to organize workers to fight collectively for their rights.

For IndustriALL, the fight against precarious work is a key strategic goal which is integrated into all its work at global, industrial and regional level,

Organize to fight against precarious work

The spread of precarious employment is clearly part of a corporate attack on the right to organize and bargain collectively. Precarious work is characterized by a little or even total absence of trade union rights, with numerous and substantial obstacles for precarious workers to join trade unions,

IndustriALL’s campaign to STOP precarious work is encouraging and supporting affiliates to organize precarious workers. Trade union projects funded by Swedish Union to Union, SASK in Finland, LO Norway, Dutch FNV, ACV-BIE in Belgium, and FCE-CFDT in France, provide concrete support to affiliates in building their capacity to develop and implement action plans on organizing, collective bargaining and campaigning. The fight against

precarious work plays an important role in promoting unity of action among affiliates, including the creation of national campaign teams representing all affiliates, notably in Sub-Saharan Africa and South East Asia.

In western Africa, despite legislation limiting the use of casual and daily workers, these contracts are regularly used abusively. In some chemical companies in Senegal, the entire workforce is made up of daily workers or temporary agency workers. Through IndustriALL efforts, a training programme for organizers has been put in place and affiliates have launched organizing drives and campaigns in targeted companies.

Union strength is dependent on membership. We have to organize contract workers, unionize them, fight for them and increase our strength.

In Pune, India, companies are hiring fewer permanent staff and are using more non-union contract workers. Permanent workers are dismissed and temporary workers are rehired for the same work but for a fraction of the salary.

The Indian federation SEM (Shramik Ekta Mahasangh) is fighting back and organizing precarious workers. Contract workers used to be victimized when joining a union. To overcome this situation, SEM registered a separate union for the manpower workers in the Maharashtra State, the Maharashtra Contract Workers Union (MCWU), in September 2014. With the support of IndustriALL, the MCWU trained organizers and organized 650 contract workers in one month.

In 2015, through the project alone, affiliates succeeded in converting 10,000 precarious workers to permanent ones.

Over the last few years, numerous examples have been reported of affiliates succeeding in negotiating improved conditions for precarious workers or to extend collective bargaining coverage to precarious workers. Many of these examples are included in IndustriALL’s publication ‘Negotiating Security’.

Fighting for and against legislation

Effective legislation that limits the use of precarious work and is properly enforced is essential.

In Indonesia, affiliates conducted a survey of more than 500 workers in ICT/ Electronics, automotive, textile/garment, cement, shipbuilding/shipbreaking, pulp and paper, mining, chemicals and energy industries in order to gather evidence of non-compliance with existing legislation. Most of the contract and direct temporary workers interviewed had their contracts renewed several times, despite the law only allowing temporary contracts to be renewed twice. Some of them had been continuously employed for 14 years.

In the Philippines, affiliates organizing joint campaigns to push the parliament to adopt a bill on security of tenure that would promote regular and permanent employment and aim to curb precarious work, particularly agency labour, which is growing in all industrial sectors.

In Brazil, IndustriALL affiliates have been running a campaign for years to prevent the adoption by the Congress of a bill liberalizing outsourcing. The proposed law to open up use of contract workers without limitation has been discussed for more than a decade. After being effectively blocked by unions for several years, employers managed to get the bill adopted by the House of Representatives in April 2015. The text is now in the Senate for a vote. Opposition to the bill has been coordinated between trade unions and broader civil society, supported by IndustriALL. So far the movement has been able to delay the vote in the Senate. 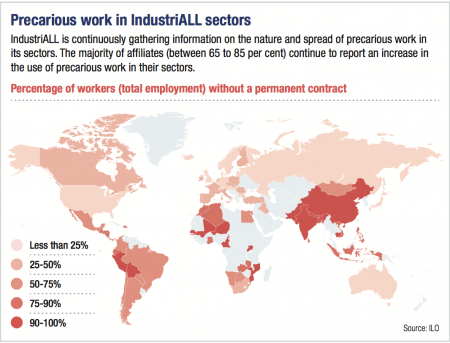 As part of the preparations for IndustriALL’s industry world conferences, affiliates have been sharing information on precarious work in their sectors. Survey responses clearly illustrate the stark inequalities between permanent and precarious workers. In all sectors, the majority of precarious workers do not receive the same treatment as permanent workers.

Their salaries are lower - the wage structure in several automotive component factories in the Chennai area in India, shows that contract workers get a wage almost eight times lower than permanent workers.

Precarious workers do not benefit from the same social protection, if any at all. It is rare that precarious workers have access to company benefits like medical facilities provided to permanent workers.

Affiliates report that precarious workers do not always have access to the same facilities at the worksite as permanent workers. In many companies in India, and at Rio Tinto Madagascar, they are forced to eat outside in the dust while permanent workers eat in their canteen. In the Cavite area, Philippines, contract workers in the electronics or textile sectors walk to work in the morning to save money, while permanent workers benefit from the company’s transportation service.

Precarious workers are exposed to higher health and safety risks and often have more physically demanding jobs with longer working hours. They receive less training and have less experience.

Precarious work has become a central issue in the work of several global and regional company and industry networks.

The use of precarious workers in the sector especially in Asia is widespread. The LafargeHolcim global network organized a global day of action on 7 October 2015. Trade unions from Europe, Asia, Africa, South and North America organized rallies, conferences and meetings to send a strong signal that LafargeHolcim must address the widespread use of precarious work at the company. More than 300 people have died during last four years while working for Lafarge and Holcim - almost 90 per cent of these were employed by subcontractors or third parties.

Indian affiliate PCSS won an important victory in January at LafargeHolcim’s ACC Jamul cement plant after years of struggle and an OECD complaint supported by IndustriALL. The settlement achieved employment security for half of the 1,000 contract workers with a progressive readjustment of contract worker salaries to reach the national wage agreement for the cement industry, as well as severance packages and support for rehabilitation for the dismissed.

Precarious work is one of the priorities of IndustriALL’s Rio Tinto global campaign. Attention has been drawn to the numerous abuses linked to an extensive use of precarious work at Rio Tinto. Affiliates are actively organizing precarious workers.

Action towards the ILO

IndustriALL is fighting for ILO recognition on how precarious work is undermining respect for international labour standards. There is a lack of institutional awareness and employers and governments have not been prepared to address the issue. After years of advocacy at the ILO, supported by the workers’ group, there was a step forward in February 2015 when IndustriALL participated in a tripartite Meeting of Experts on Non-Standard Forms of Employment.

The conclusions of the meeting have the potential to significantly strengthen the ILO’s responses to precarious work. They include recommending that the ILO improve data collection and reporting on precarious work. Importantly, the recommendations also called for future Meetings of Experts on temporary employment and on discrimination on the basis of employment status, opening up the possibility for future international labour standards to be developed in these two areas.

Thanks to the wealth of knowledge and experience that has been developed over the four years of the campaign to STOP Precarious Work, building on the work that had already been done by our founding global unions, IndustriALL affiliates throughout the world stand ready to confront precarious work in all its forms,

The fight against precarious work is not over, nor will it be any time soon. At our second Congress in Rio de Janeiro in October, affiliates will be asked to reaffirm their commitment to the global campaign as it moves into the next phase. It will be a time to reflect on the many, many achievements of the campaign and to gather strength for the challenges ahead.

What we can be sure of is that wherever precarious work takes hold, IndustriALL affiliates will be organizing, bargaining, fighting politically and uniting their strength to protect workers’ rights.