How did you join the union?

I was raised by a single mom. We grew up poor so we were on and off welfare for most of my childhood. My mom struggled paying the bills and putting food on the table. She always worked really hard, but it was never enough. If we would get sick, she would have to miss work. If she missed work, she didn’t get sick leave. So she didn’t get paid, then she couldn’t pay the rent. She was subjected to harassment at work so sometimes she would just quit.

And then she got a new job. I remember her coming home from her interview and telling me, maybe if I could just get this permanent job, it would change our lives, and she was right. She went to work for the state at a hospital for the mentally ill, we didn't go from poor to middle class, but we went from poor and being economically insecure, to at least having some economic security.

I always knew that the union was a positive, even from a young age. The state reclassified her position and her union fought for back pay. She got a check for US$7,000, which was more money than we had ever had at any one time. I remember asking her where the money came from and she said it was because her union fought for her.

I always had a really positive relationship with the union. Even though my mum wasn’t active in the union, she was a single mum of three and working full time, I always knew that the union was a positive force. When I started working, and as soon as I had an opportunity to join a union, I did, and gradually got more active.

A shop steward invited me to a union meeting. At first, I was like yes, I'd love to go. Then I thought, it is late and I need to get my kids from daycare and do homework, bath time, dinner… But a shop steward in my worksite saw leadership in me, even before I saw it in myself, and he just kept asking me to get involved. He kept inviting me to union functions and one day and he said; ‘April, we have a workplace safety issue and we're going to ask our local for some help. We really need you to come to the local meeting, and if you come to the meeting and vote in favour of what we're asking for, we can really make a difference.’ 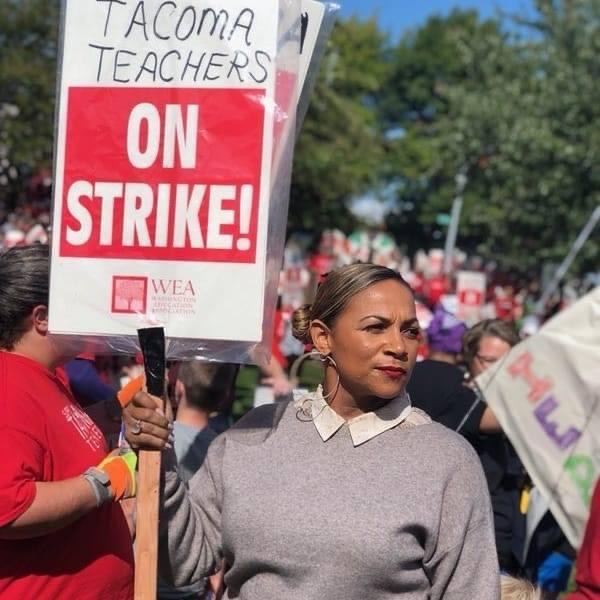 "I remember going to that first local meeting and seeing a lot of really old white people, but also recognizing that I had a voice and I could help bring about change. "

The reason I got active in my union is really because I was invited to a meeting and because my local, and my union at the time, was really working on leadership identification and leadership development. They invested in my leadership. And when my union was hiring a union representative I applied and they hired me. I come from ASMI Council 28, which is state and county employee’s union; it was my mum's local.

I worked as a council rep for a couple of years, with low level negotiations, processing grievances and training shop stewards. Then I moved into the legislative and political action department and worked as a statewide field coordinator for about a decade, building our member political engagement programme.

I started working for the Washington State Labor Council in 2015. As much as I love my home union, the state Labor Council was really the only labour organization that was working on other issues that I cared for, outside of wages, benefits and working conditions. The State Labor Council had a really bold progressive agenda. In 2015, they were the only ones talking about Black Lives Matter, the only ones working on criminal justice reform and climate justice. I started as the field director and moved into the political director position in 2017, and was elected secretary treasurer and started my term at the beginning of 2018.

The Black Lives Matter movement spread globally and the unequal world that we live in is being unveiled for all to see. Are unions in the US playing a role within the BLM movement?

I can speak more directly for Washington State than nationally. I think that unions nationally are trying to figure out how to play a role with the Black Lives Matter movement. Our structures are so different. They say that battleships don't turn on a dime. Our institutions are like big battleships, filled with bureaucracy and process, and that doesn't always afford us the nimbleness that we need to work with movements that are fluid and not as process-heavy. 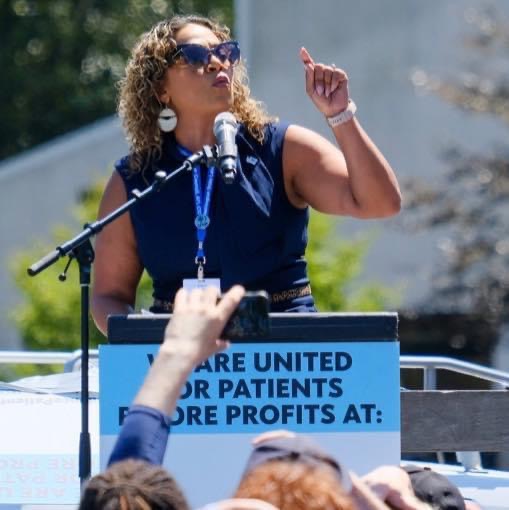 We are trying to be mindful that we don't just come in and say, you know, here's how we think we should do things and we need to march, we need to rally, without being mindful that there are communities that are literally putting their bodies on the front line. We need to figure out how we take our lead from them.

The democrats won the Presidential election and will lead a divided country. Have the unions and the Black Lives Matter movement played a role in Biden and Kamala Harris being elected?

Absolutely. If you look at the areas where Biden and Kamala won; Detroit, Philadelphia, Atlanta, Milwaukee; metropolitan, urban cities that are predominantly and historically Black cities. There is no doubt that Black Lives Matter as a movement, and as a voting bloc, made a big difference in terms of raising the consciousness, calling out Trump and his politics, calling out the racism in his administration and in his rhetoric. And for as big a difference as it made, it is still shocking to some people that Trump was able to secure so many votes. I think those are people who don't know what black and indigenous folks in this country have always known – racism is deeply embedded in our systems and institutions.

What role did women play in the election?

Biden choosing a woman to run as Vice President, and choosing Kamala Harris, allowed recognition that black voters, and specifically black women voters, have been the foundation of the Democratic Party for years. Without black women showing up, there is no way Biden could have won.

President-elect Joe Biden has made sure that the voices of working people will be heard in the transition to his administration. He has appointed more than two dozen leaders from the labour movement to the various agency review teams that will help make sure the Biden administration is ready.

You have said that you spend your time working in systems and structures not designed with you in mind (meaning as a Black woman). What is needed for this to change? 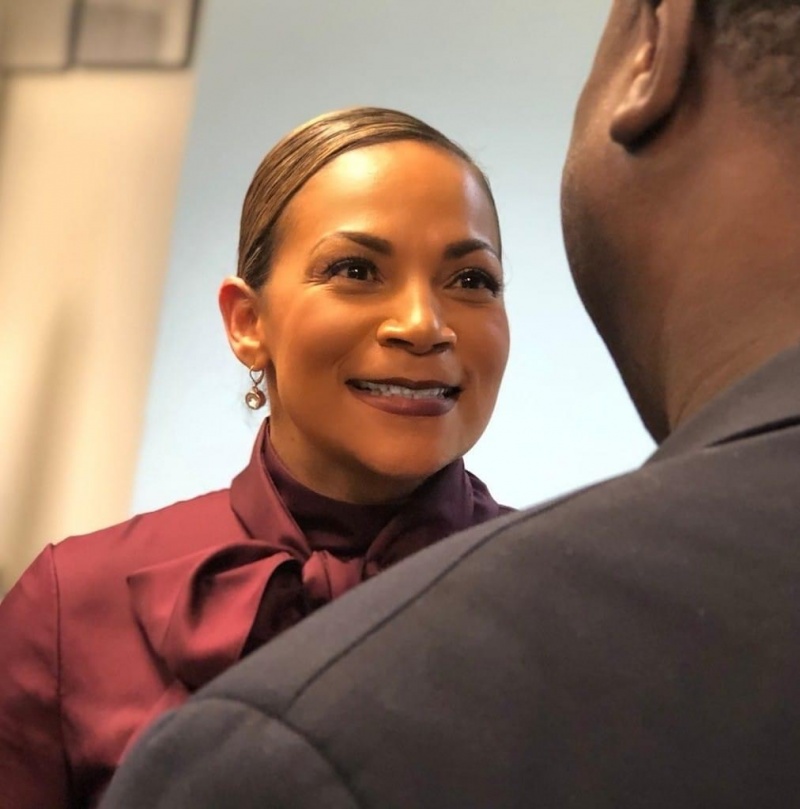 I don't mean to sound cliché, but leadership in the trade union movement is largely white and male. The Economic Policy Institute predicts that by 2025, women will be the majority of the labour movement, but we represent about 20 per cent of leadership positions.

There is a real lack of representation of women, and especially women of colour, and a recognition that the intersections of racism and sexism are unique for Black women. There are even fewer Black women in leadership positions in the labour movement. The only way to change this is to have more women of colour in leadership positions and more representation across the broader labour movement.

Everyone loves the idea of supporting a Black woman in leadership. I don't know that everyone is prepared for the ways in which Black women lead and how that is different. It means that there is sometimes a dynamic where people don't recognize your leadership style, as it is not the same as when traditional white men lead. The only way to change that is to have more women and women of colour. It's not just bringing another chair to the table, it is making sure that everyone at the table is dealt into the game and knows the rules so that they can compete.

It's going to take more representation, it's going to take more women, and specifically more women of colour in leadership positions, for us to change the way we view leadership. We need to identify leadership as more than someone banging their fists on the table and making decisive decisions but rather someone who is interested in creative collaboration, or soft power and sharp elbows. It is not about having all the answers, it is about asking all the questions.

The conversation around structural racism in the trade union movement is uncomfortable because of what unionism is supposed to stand for. How do you think unions can tackle this?

Our own institutions have to be willing. It is my love for the labour movement that makes me critical of it, because I know the difference that the movement makes in the lives of workers, and families and communities. It is that love that allows me to be critical and think about the ways in which we need to change and the things we need to do to make sure that we are seen as the force for good, by young people and people of colour.

The Labor Council in Washington State is building a programme designed for us to become an actively anti-racist organization. We created and filled the position for a racial and gender justice director who will help us treat this work like an active campaign. I'm both, changing and challenging the way that we talk about race and thinking about the way our institutions perpetuate racism.

We are creating space for new leadership styles and working with white leaders and white rank and file members to help them see the various manifestations of racism. We have to become more inclusive.

"We need young people and people of colour to look at the labour movement and say ‘that's the organization for me and I see a place for myself here because it is not just led by white male voices’."