15 June, 2021In February of this year, we celebrated the 50th anniversary of women’s right to vote and to stand for election at the federal level in Switzerland. Women were no longer second-class citizens. Fifty years later, we still have to mobilise to stop women being treated as second-class workers.

“Men and women have the right to equal pay for work of equal value.” This right has been enshrined in the Swiss Constitution since 1981. And yet:

In June 2019, between 500,000 and one million women took to the streets to call for greater equality, echoing the first feminist strike in Switzerland on 14 June 1991.

Women’s voices are still not being heard.

The pandemic has shown that women are on the frontline but are working for wages that are often too low, with insufficient staffing levels and in a context of widespread precariousness. 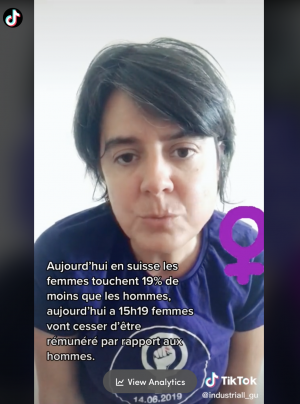 On 9 June, the National Council agreed by a large majority to raise the retirement age for women to 65. It is unacceptable to make women pay for the reform of the pension system, when this could be corrected by putting an end to wage inequality.

Added to this is the structural problem of sexist and sexual violence against women.

Switzerland’s trade unions are taking part in the Feminist Strike and are calling for mobilisation on 14 June.

For UNIA, it is more than time to revalue the essential work done by women and to put a stop to the attacks on women’s rights. For the first time in its history, the union has a female majority on its leadership team.

SYNA is calling for a thirteenth month’s pay, guaranteed breaks and a living wage – conditions that are by no means a given for many service sector workers.

“The powerful feminist strike of 2019 was very important. Among its many other accomplishments, it was part of the strong call for the adoption of ILO Convention 190, which took place on 21 June 2019 in Geneva. Despite this strong mobilisation, the situation of women workers in Switzerland is not progressing but regressing. IndustriALL supports its Swiss affiliates in the struggle for equality now, against a capitalist and patriarchal system,”