25 February, 2020IndustriALL affiliate Sintracarbón and mining company Cerrejón have agreed to extend the collective bargaining period until 6 March. If no agreement is reached by then, the union will vote whether to go on strike.

Under Colombian law, the initial bargaining process lasts 20 days, with the possibility of extending the period for an additional 20 days. Sintracarbón submitted its list of demands and the company responded with an initial proposal.

According to the union, the proposal did not meet its demands. Cerrejón offered a wage increase of 3.80 per cent, which is in line with 2019 inflation and would mean that the company would effectively freeze wages and benefits for two years.

The union’s negotiating committee says in a statement:

"The response goes against the well-being of local communities and the 12,000 families who earn a living from mining. Cerrejón wants to reduce worker's benefits, including the signing bonus and seniority-related wage increases, and have refused to discuss the 27 new demands on the list. The employer are even trying to cut benefits that the union fought for over three decades of negotiations and through two strikes."

Cerrejón is using the international crisis in the coal sector to justify its response. But union leaders think that the firm has only put that argument forward to try and reduce the benefits set out in the agreement and make the working conditions at the mine even more precarious. They have, for example, refused to allow workers with fixed-term contracts to switch to permanent contracts.

Union workers plan to campaign across the country until 6 March to protect their employment rights. If an agreement is not reached by then, Sintracarbón will hold elections to decide whether to go on strike.

"IndustriALL supports Sintracarbón in its struggle to get Cerrejón to accept the list of demands for the new collective employment agreement. The company needs to stop trying to undermine the fundamental rights of Cerrejón workers.

We urge Cerrejón to act in good faith in the ongoing negotiations, to not only take into consideration the company's profitability and sustainability but also the invaluable commitment and sacrifice made by its workers, and to agree to Sintracarbón's fair list of demands." 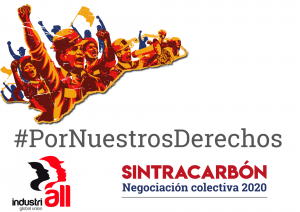