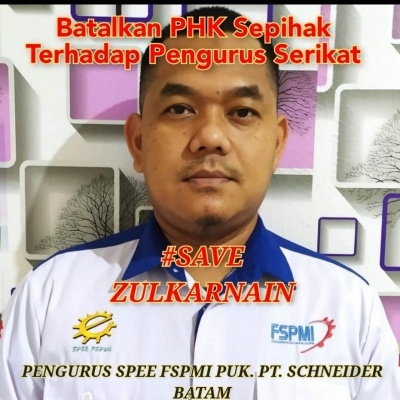 As part of a strategy to get rid of union leader Mr Zulkarnain, PT Schneider Electric changed his job to one that do not match his skills and work experience. Despite being employed as a metrology engineer for more than 10 years, the company arbitrarily changed his position to supplier quality engineer in May 2020, with new responsibilities. The company claimed it was for his self-development, and that his current work load was too light.

He was forced to accept the position, because management said he could either take the offer or leave.

On 10 March 2021, management gave him both a first and second warning letter, alleging under-performance. Mr Zulkarnain was dismissed on 21 May 2021, with the company claiming that the union leader was incapable of carrying out his work.

Management threatened Mr Zulkarnain not to appeal the dismissal through the union, otherwise he would receive only 50 percent of the compensation package.

“The dismissal at PT Schneider Batam is clearly union busting. This is a real threat for workers to continue to fight for their fundamental rights in the workplace. We will continue to fight against the unfair dismissal, and international support is very much needed.”

“It is not acceptable that the company is bullying Mr Zulkarnain. The attitude taken by the management violates the company’s Global Anti-Harassment Policy.”

“The dismissal of Mr Zulkarnain is an act of union busting disguised as a job transfer.

“The threat not to be involved in trade union activities blatantly violates Indonesian labour law as well as international norms and standards.

“We urge you to stop all acts of union busting, and accept the demand of FSPMI to immediately reinstate Mr Zulkarnain.”