11 March, 2021The European labour movement is driving the campaign for due diligence legislation at EU level.

European affiliates of IndustriALL Global Union and IndustriAll Europe are campaigning for the EU Commission to adopt due diligence legislation. This legislation would compel companies to act on actual and potential human rights violations and environmental risks in their own operations, supply chains and the services they use.

On 4 and 5 March, 80 participants from over 20 different European trade unions met online to discuss ‘Company Due Diligence and non-financial information: threats or new leverages for workers’ representatives?’. The event was organized in cooperation with the consultancy firm Syndex. It including a full day of training for representatives on understanding and using the proposed legislation. 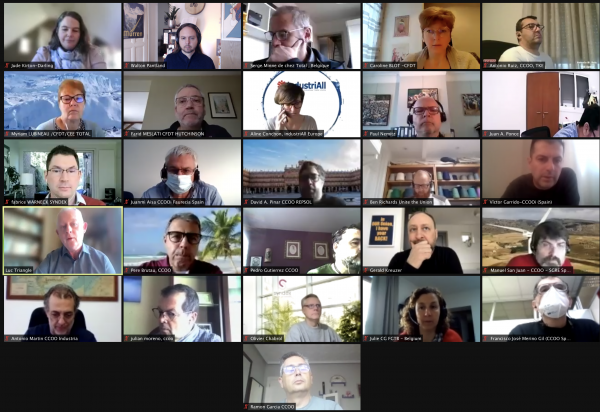 Ben Richards of the Unite union in the UK stressed that “due diligence must not be a replacement for globally coordination trade union action”, but should be seen as another tool.

“It is not only important to have binding mandatory EU rules on due diligence and sustainable corporate governance, but we must also train our employee representatives to make sure that they can use this important tool in their daily work. Moreover, we need to know what kind of concerns or expectations they have.”

Speaking at the event, Paul Nemitz, the principal adviser on justice policy at the EU Commission, made compelling arguments for due diligence legislation, based on a three-year period of study and consultation. He explained that due diligence serves the political goals favoured by trade unions and their allies, but is also good for business, because due diligence discourages the short-term thinking that makes companies vulnerable to downturns and other crises. The legislation will make EU business more resilient by encouraging long-term planning and business strategy. Legislation would also strengthen social dialogue by redefining the interests of the company to include sustainability, workers, the environment, and the community, as well as shareholders.

Legislation is necessary to create a level playing field. The voluntary approach has not worked: in February 2020, the Commission published a study which found that only one in three companies is currently taking due diligence measures.

This work builds on developments in global jurisprudence: in 2011, the UN Human Rights Council endorsed the Guiding Principles on Business and Human Rights, which introduced the first global standard for due diligence. Other international organizations subsequently developed due diligence standards based on the Guiding Principles, such as the 2011 OECD Guidelines for Multinational Enterprises and the 2017 ILO Tripartite Declaration of Principles Concerning Multinational Enterprises and Social Policy.

National legislation has followed, most recently with the announcement of a draft law in Germany. Nemitz proposes that EU legislation be broader than the German initiative, by including smaller companies and developing a measured approach to supplier responsibility.

On 10 March, MEPs adopted a report from the European Parliament’s legal affairs committee recommending that the Commission adopt due diligence legislation that meets these guidelines. MEPs argued that all companies that want to access the EU's internal market would have to prove that they comply with due diligence obligations.

“We fight for mandatory due diligence across the supply chain, with sanctions and access to remedy for victims. This will help to rebalance economic power in favour of workers. There are a number of different systems and legal frameworks. We need to fit them together to create an overall coherent picture that improves working conditions.”