15 June, 2020STEM stands for science, technology, engineering and mathematics. Addressing gender gaps and protecting women in STEM is among one of the most urgent challenges for trade unions today.

Embedded social and cultural norms, stereotypes and behaviours prevent women from enjoying their basic right to equal opportunities and equal treatment in STEM.

In addition, in their efforts for a Just Transition in shaping the future of work, unions should ensure that women are not forgotten and will benefit from a fair redistribution of jobs, time and profit.

What is at stake?

Even if the STEM jobs are not necessarily highly qualified jobs, occupations in the STEM classification are disproportionately higher-skilled relative to other occupations.

Most of IndustriALL sectors are STEM sectors; manufacturing, energy and mining employ a high proportion of people with STEM qualifications who work in STEM occupations.

STEM jobs pay well and are expected to be the jobs of the future. With the development of new technologies, manufacturing sectors require new technical and technological skills. STEM fields are key in the development of Industry 4.0 and in dealing with climate change. STEM-related jobs are growing significantly faster than others.

The proportion of women in STEM jobs, and especially among high-skilled jobs, is low. The gender gap starts in higher education; according to UNESCO only 35 per cent of students enrolled in fields of study related to STEM are women.

The Confederation of Japan Automobile Workers’ Unions (JAW) says that the male to female ratio of newly employed engineers is not 50/ 50 due to the fact that female students are represented at around 15 per cent in technology departments.

In addition, there is also the problem of women dropping out of STEM disciplines in disproportionate numbers during higher education, in the transition to the world of work and even in their careers. For example, across European Union countries, only 20 per cent of women aged 30 and over who hold ICT-related degrees decide to stay in the technology industry.

Roots of gender inequalities in STEM

Girls are rarely encouraged to study science, technology or mathematics. These careers are perceived to be more for men. Young women are also often afraid of the prospect of being the only girl pursuing a STEM career, as well as of the possibility of future discrimination by employers. Add to that that there are few female role models or mentors that can help young women overcome these difficulties.

In a presentation on Women in STEM at IndustriALL women’s Conference in November 2019, Swedish union Unionen listed several factors explaining why women drop out of STEM education before they graduate

This discrimination continues for women working in STEM. A survey conducted in the US in 2017 show that women experience discrimination in several ways: they earn less than men doing the same work; they are treated as if they are not competent; they receive less support from senior leaders than men doing the same job; they feel isolated in the workplace; they are passed over for the most important assignments; they have been denied promotions because of being a woman.

According to Unionen, women are often overqualified for the jobs they end up doing. UNIFOR in Canada has reported that where women are involved in research within the STEM occupations, women often wind up in precarious work and leave for more secure, but lower paid, employment.

Women in STEM face glass ceilings and walls. Women choose, and are chosen, to occupy more generalist, less technical and lower management positions. Consequently, women are far more likely to be in junior positions than men regardless of age. In 2017, a global survey conducted by HackerRank among more than 14,000 professional developers (including 2000 women), showed that over 20 per cent of the women over the age of 35 were still in junior positions, compared to 6 per cent of their male counterparts.

In a recent workshop in Madagascar, IndustriALL affiliates from the mining sector reported that women trying to access work in technical or STEM occupations face discrimination. Because of both unconscious or conscious bias and the prospect of possible maternity leave, young women are often disadvantaged during the recruitment process.

In many parts of the world, women are expected to stay at home and be in charge of childcare and household work. The lack of flexibility in working hours and the challenge of work life balance in STEM contribute to the disproportionate drop out of women from these careers.

There is a wide-spread  macho culture in STEM sectors. In tech and computer science, a ‘brogrammer’, brother and programmer, culture, pushes women to leave the sectors.

At IndustriALL’s automotive working group in Germany, December 2019, sexism was reported as one of the main issues that women face in the STEM sector. Women have to face conscious and unconscious sexism on a daily basis from male colleagues and supervisors, with jokes, behaviour, comments undermining women’s work, questionning their competencies, isolating them or preventing them to evolve in their career.

Women are leaving their dream careers because of subtle forms of discrimination pervading the industry. “It is death by a thousand paper cuts and managers not believing you are bleeding,” says a woman software engineer in London. “These things can seem like small problems or nothing at all to someone hearing them for the first time [but] by the time you are telling someone, you have been ground down.”

Women in STEM are not spared GBV. Several studies and testimonies from women in STEM denounce the high prevalence of sexual harassment in these fields.

What should unions do?

“Getting more women in STEM and protecting them, at a very basic level, is a question of fairness. Women should have the same opportunities as men to choose to pursue and succeed in a STEM career. It is also part of the efforts that unions should develop to become more inclusive and diverse and to adapt to a transforming world in order to survive. With the development of new technologies and the Industry 4.0, it is a critical time for unions to act now for the women in STEM,”

Unions should call for concrete and genuine action for gender equality in STEM, and actions to fight the stereotypes and social norms that perpetuate discrimination and domination against women. If trade unions want to organize these women, many of them being white collars, they have to develop specific strategies.

IndustriALL world women’s conference insisted that organizing, protecting and defending the rights of women in STEM should be a priority for unions. Organizing these women will be possible only if women feel represented and protected by their unions. Diversity must be reflected at all levels of trade union structures, including leadership, and a gender perspective must be integrated in all trade union action, in order to respond to the different needs of all the workers.

In addition, in order to contribute to a change of mentalities, breaking embedded stereotypes and reinforcing women’s self-esteem and confidence, awareness raising and trainings inside the union and among the members is essential.

UNIFOR in Canada has been addressing the underrepresentation, stereotypes, and lack of skills and knowledge internally through education. The union has organized, in partnership with training institutes, several trainings and awareness raising programmes for women members in order to encourage them in entering or returning in STEM sectors. The aim of these activities is to build confidence in their female members and to bring women into the trades.

Unionen, together with two organizations, Women in Tech and Women in IT, last year organized a workshop for women in tech to hear the voices of these women. Women have put together a list of demands.

In the UK, Unite the union and other unions gave presentations in schools and invited students to workplaces to showcase STEM careers.

Addressing discrimination in STEM sectors and begins with the recruitment process. Trade unions should push for transparent, open and accountable hiring processes. Conscious or unconscious bias in recruiting new workers especially in technical positions should be addressed. In Madagascar, IndustriALL affiliates in the mining sector have been monitoring the inclusion of gender neutral language in job vacancies for technical positions.

Transparency is key to ensuring equal remuneration for work of the same value and equal opportunity for promotions. Trade unions should push for transparent salary scales and promotion processes. In order to effectively monitor gender equality, it is key that trade unions have access at company level to gender segregated data including on new recruited employees, promotions and salary increases; the distribution of workers in the different job categories, and at different levels of the salary scale.

In the car industry, after an initiative by UK union Unite, audits took place, managers and union representatives were trained together, and the site has now an Equal Pay Review Committee with union representation.

In many countries, the law obliges companies to establish equality plans to help to fight against discrimination. In Finland, the legislation provides that for all workplaces of more than 30 people, equality plans should be put in place in collaboration with trade unions. In technology industries, employers and trade unions, including IndustriALL affiliates, have developed training material and training modules on how to develop equality plans and conduct pay surveys to check the gender pay gap. Workers’ representatives and managers participate in these trainings.

Together with Swedish employer’s organization Almega, Unionen has launched a cooperation project to monitor how companies are doing in terms of discrimination. They are conducting surveys and collecting information for a sample of enterprises.

Industry 4.0 has a different impact on women and men. Women have less access to training than men due to lack of time. Trainings should be organized during the working hours of women. Women are often stuck in medium skilled jobs in STEM that are expected to disappear. Lifelong learning is key to helping women workers throughout their careers so they can benefit from the creation of new jobs.

Trade unions should negotiate measures on work-life balance for men and women in STEM and measures to reduce and redistribute the burden of child care and household work by improving paid parental leave and enhancing access to child care services.

Gender equality in STEM will be possible only if women are not exposed to GBV. ILO Convention 190 on violence and harassment in the world of work is a key tool for unions. It can help tackle the underlying causes of GBV, including multiple and intersecting forms of discrimination, gender stereotypes and unequal gender-based power relations. Workplace risk assessments, as set out in the Convention, can also help to change attitudes because they can take into account factors that increase the likelihood of violence and harassment (such as gender, cultural and social norms). 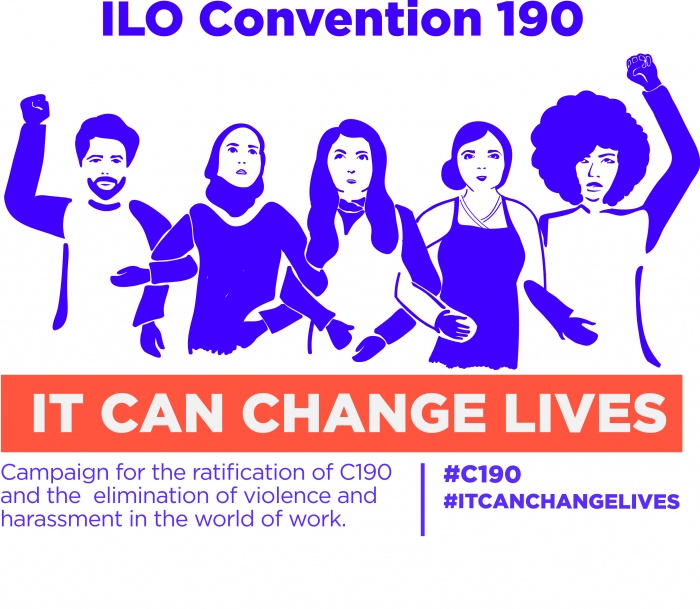 IndustriALL encourages its affliates to join the campaign C190, it can change lives in order to put an end to sexism and violence and harassment, including in STEM sectors.