27 March, 2019Mining companies in Zambia are increasingly employing workers through contractors instead of offering direct employment. Unions are recruiting and organizing to fight back this promotion of precarious work.

The Mineworkers Union of Zambia (MUZ) is on a recruitment drive for contract workers who are often employed on short-term contracts with low pay and little or no benefits. The same workers are put under pressure to perform dangerous work to meet targets sometimes with disregard to health and safety standards. However, when injuries and death happen, employers shift the blame to the contractors.

On 18-19 March MUZ, affiliated to IndustriALL Global Union, with support from the Sub Saharan regional office had a recruitment and organizing blitz in Chililabombwe district at EMR’s Lubambe, and the London-listed Vedanta Mining Resources’ Konkola Shaft 3 copper mines, where the union emphasized the importance of belonging to a union to fight for workers' rights collectively. At Lubambe, all contracts will end in August, creating an uncertain future. 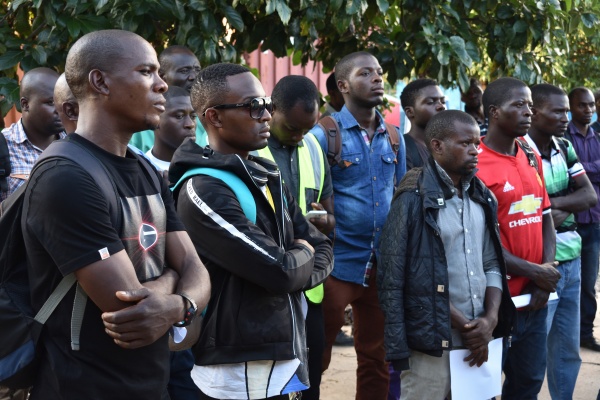 In the last few months, MUZ has signed recognition agreements with the multinational mining contractors, Reliant Drilling and Redpath Rig Resources, among other mining companies. One of the benefits of these agreements is the extension of contracts from three months to two years, but the goal for MUZ is for permanent jobs for the workers.

“Short contracts make workers reluctant to join a union because there is no job security. To counter the short contracts, we are campaigning for decent work and permanent jobs.”

“Organizing is key to building union power as it allows the union to effectively engage the employer in collective bargaining. Recognition agreements are an important tool not only to increase membership but to build the strength of the union.”

Zambia is in the IndustriALL union building programme, which also includes seven other countries in the Sub Sahara region.