12 May, 2022IndustriALL is launching its full report on gender-based violence and harassment in the mining, garment and electronics sectors. The report presents recommendations for IndustriALL and its affiliates, highlighting the commitment of male trade unionists and leaders as essential for unions to succeed in this struggle. 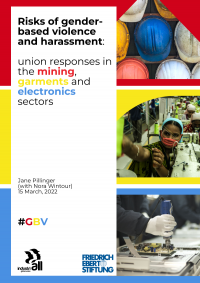 The hundred or so women trade unionist and IndustriALL leaders interviewed for the research provide an insight into IndustriALL’s affiliates actions and negotiations to end GBVH. Power inequalities, discrimination, victim-blaming and a culture of impunity exist in all three sectors and are among the root causes of gender-based violence and harassment.

Concrete progresses can be achieved where unions challenge discrimination and inequalities and support the victims. The involvement of unions in complaints mechanisms is key in the fight against impunity. The role of women leaders in unions to build trust with women workers and put GBVH on the union agenda is crucial.

Women are calling for male trade unionists to engage. Training and awareness-raising focusing on changing behaviour among men in the union movement is needed.

USW in Canada have developed an active bystander training. In 2021, USW partnered with the Canadian Football Players Association (CFLPA) to “break the silence” on GBVH through a spokesperson training programme for male union members. This enabled them to give a 90-minute presentation to union members on how to work as male allies to end GBVH.

“We always tell men that we are not asking them to stand up for women, just stand up with them. Be more! It’s a very small number of men who are abusive and we’re trying to get the majority of men who are decent to speak up and help change the culture,”

said a union shop steward participating in the programme.

“This research is powerful and will be critical for IndustriALL’s work in garment, mining and electronics. Reading the testimonies of all these women trade unionists from IndustriALL affiliates you learn about their fierce fight. It shows how the active involvement of unions makes a difference in the daily life of women workers. Mind-sets and behaviours need to change and unions should be agents of this change. They should fight the stereotypes and social norms that perpetuate discrimination against women. They should hold employers and companies accountable for their failure to prevent and address GBVH,”