1 February, 2022On 1 February 2021, the democratic government of Myanmar was overthrown by a military coup. On the first anniversary of the coup, the struggle for democracy continues.

One year ago today, the Myanmar military staged a coup after the military-led party was defeated in a democratic election. IndustriALL Global Union condemned the coup the same day, and immediately began working with affiliated unions in Myanmar to protect workers’ rights until democracy could be restored.

Resistance to the coup was strong: hundreds of thousands of civil servants refused to work under the junta, workers went on strike, a Civil Disobedience Movement was launched, ethnic minorities came together, and a government in exile was formed.

Unions in Myanmar and IndustriALL called on business to ensure that workers’ rights were protected during the coup. However, it quickly became clear that this was impossible: local factory owners used the coup as an opportunity to fire the unionized workforce, giving the details of union members to the police.

“No democratic trade union can operate now at factory level.”

She calls the situation “modern slavery”, explaining that the president of her union was recently threatened with assassination. Workers do forced overtime as day labourers and are often not paid. She believes that effective due diligence is not possible in these conditions.

The situation led the labour movement of Myanmar, backed by IndustriALL, to call for comprehensive economic sanctions against Myanmar, and for global companies to cease to do business in the country. IndustriALL has written to these companies expressing this demand. As a consequence, many companies have scaled down their operations, while some, including Total, Chevron, Bridgestone and C&A have pulled out of the country altogether.

The democratically elected government formed a government in exile, mostly based in Thailand. The National Unity Government (NUG) is made up of members of the National League for Democracy, the party that won the election, as well other parties that respect the democratic outcome, and groups representing ethnic minorities.

The NUG formed an armed force which is fighting a guerilla war against the military junta, resulting in retaliation from the military against civilians, with cities being shelled by artillery. About 1,500 people have been killed, while 20 air strikes against rebel villages have led to an estimated 32,000 refugees, with 776,000 internally displaced people. 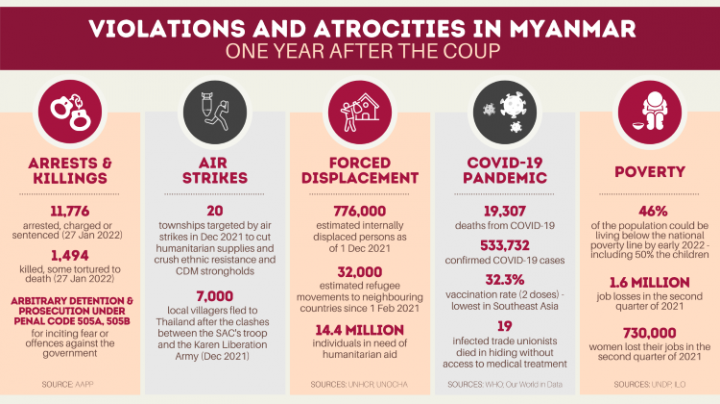 Most trade unions in Myanmar recognize the NUG as the legitimate interim government of Myanmar. The international labour movement – including the ITUC and IndustriALL – have called for the NUG to be globally recognized since April 2021. The labour movement has also led diplomatic efforts to isolate the junta and recognize the NUG at UN events, including the International Labour Conference in June 2021. The diplomatic efforts are bearing fruit, and the French Senate and European Parliament recognized the NUG in October 2021.

Although the labour movement recognizes the NUG, its tactics, strategy and priorities are different. While the People’s Defence Force of the NUG is fighting an armed struggle, the labour movement focuses on peaceful civil disobedience, prioritizing strikes and an international campaign for comprehensive economic sanctions against Myanmar.

While the NUG does not officially support the call for sanctions, it does call on global business to refuse to cooperate with the military regime, or to pay any taxes or fees. The labour movement meets with the NUG labour ministry on a weekly basis to coordinate efforts to protect workers’ rights.

IndustriALL believes that the strategy to isolate the military junta diplomatically and economically is the most effective way to bring peaceful change to Myanmar. The campaign for sanctions will intensify, and increasing pressure will come on companies that continue to operate in Myanmar.

IndustriALL and our sister organization industriAll European Trade Union today wrote to the European Commission demanding an end to the EU’s preferential Everything But Arms trade agreement.

“The global labour movement, and supporters of democracy everywhere, will never accept the normalization of the military dictatorship in Myanmar.

“In the days immediately following the coup, many companies may have sincerely believed that the most responsible thing to do was to continue to provide sustainable employment to people in Myanmar.

“However, it is becoming increasingly clear that due diligence is not possible in a dictatorship. These companies must cease operations in Myanmar immediately.”