17 February, 2022Europe is running out of paper because Finnish forestry giant UPM refuses to negotiate with unions representing striking workers. The strike, which has been extended until at least 12 March, is costing the company up to €20 million per week and risks causing a supply chain crisis.

The prolonged strike will force the company to break commercial contracts to supply paper and is expected to lead to a Europe-wide paper shortage. Intergraf, the European printing industry association, has written to UPM calling for an end to the strike, warning that 40 per cent of the paper required by its members will not be available if the strike continues. UPM makes backing sheets for labels, which are used to label goods in all sectors, as well as material for packaging goods and publishing media.

Print and packaging companies are warning of an existential threat to the industry, saying that the unavailability of paper will hasten the shift to digital. UPM has written to some of its customers warning of its inability to meet its commitments, and claiming force majeure, a clause that limits liability for breaking contracts due to an unavoidable catastrophe, such as the Covid-19 pandemic.

Unions are calling on UPM customers to reject this claim, as the situation was avoidable, and is created by the company’s refusal to negotiate. In a 2021 judgement, the European Court of Justice ruled that force majeur was not applicable in a case of industrial action that met legal requirements.

UPM is trying to break decades of collective bargaining practice in the industry and at the company by refusing to negotiate unless its preconditions are met. Meeting these preconditions would dramatically weaken labours' bargaining position in future, and would leave groups of workers without representation. Workers at the company, represented by IndustriALL Global Union affiliates Paperiliitto (Paper Union), and Ammattiliitto Pro (Trade Union Pro), have been taking industrial action since 1 January.

Convenors for the Unite trade union - also an IndustriALL affiliate - at WestRock and Antalis in the UK were told by their employers of the impending paper shortage and UPM’s claim of force majeure. They approached the Finnish unions for clarity. At a global meeting of pulp and paper unions, the Finnish unions explained the situation and called on unions in other countries to put pressure on their employers to reject the force majeure claim.

The unions explain in a statement that the company can end the crisis by returning to the negotiating table and reaching an agreement that complies with general labour market policy in Finland:

“The Paperworkers’ Union and the Trade Union Pro consider that a ”force majeure” situation does not exist, but this is a conflict caused by the company pursuing its ideological objectives.”

“We want to get back to work at UPM. The industry standard has been set by our collective agreements with the other companies in the sector. The only barrier we face is an anti-union attack by UPM management, for ideological rather than business reasons.”

“At a time when economic recovery from the pandemic is still fragile, we face a totally manufactured supply chain crisis. We need paper for everything: food labels, packaging, paper towel and print.

“UPM is holding Europe to ransom with its stubborn insistence on breaking collective bargaining. The company hopes to dodge its responsibilities by claiming force majeure. Unions will approach UPM’s customers directly to expose this tactic for the hollow sham that it is.”

Download the poster below, print it out and take a picture of yourselves and your colleagues holding it. 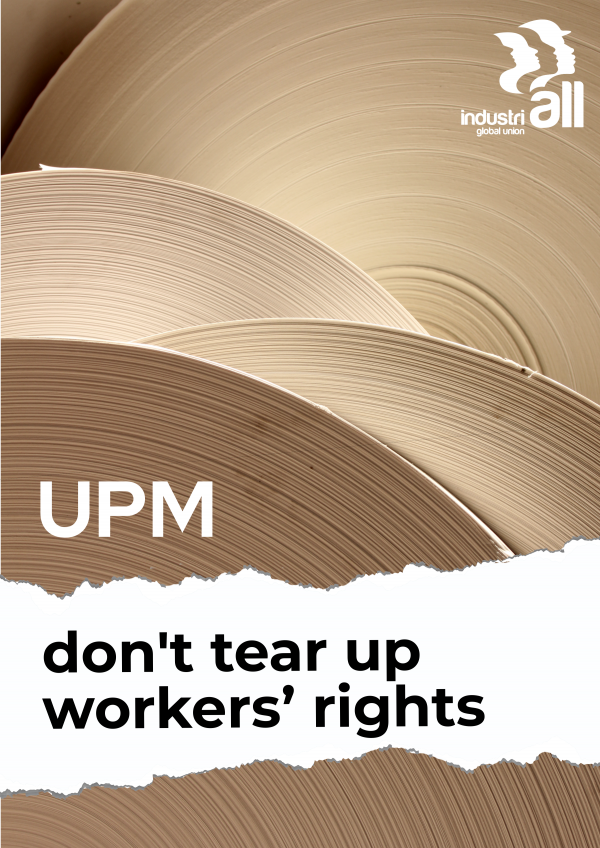