24 November, 2016Global days of action in support of the general strike in Korea, on 30 November, continue around the world. IndustriALL Global Union affiliates are taking action in a collective effort to show the world that they will not accept the increasing attacks on workers’ rights in South Korea.

As the #KoreaGeneralStrike approaches, solidarity actions are pouring in. Hundreds of unionists from Kyrgyzstan, Brazil, Germany, India, Switzerland, Greece, Hungary, France, Pakistan, the Philippines, Russia, Ukraine, the USA and Sweden have taken action, taking pictures of themselves holding signs in support of the general strike for workers rights and sharing the images on social media. 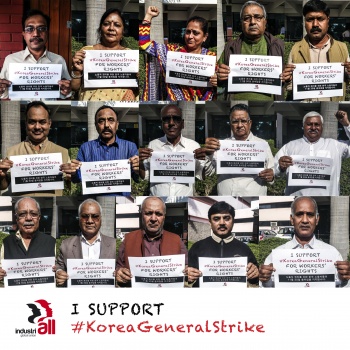 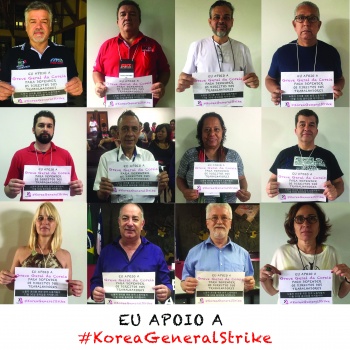 On 30 November, unions in Brazil have planned protests at a Hyundai Auto plant in Anápolis and a Hyundai equipment plant in San Léopold while IndustriALL together with other Global Union Federations (GUFs) will march to the Korean mission in Geneva to deliver their protest letter.

Korean Metalworkers Union (KMWU) members met on 21 November to prepare for the general strike and expressed their gratitude for the solidarity shown by unions all over the world.

On the days leading up to the general strike you can continue to show your support in many different ways. Here is what you can do: