6 June, 2019Young unionists from Latin America, the Caribbean and Germany organized their second annual international exchange meeting in Brazil. They shared and debated their plans of union building, organizing and training for youth in their unions.

The second year of the International Youth Exchange and Training Project of IndustriALL Global Union and the Friedrich Ebert Foundation (FES) felt like a genuine reunion. Having held their previous meeting in Argentina in 2018, the participants held their next exchange week with enthusiasm on 27 to 31 May in Curitiba, Brazil.

The young Brazilians started to prepared the content and the presentations of the educational materials a month before. They started with a mystica - an artistic performance - about resistance, doing a live performance with music.

They presented the history of the trade union movement in Brazil, the structure of trade union organizations, as well as the characteristics of negotiating and collective bargaining. The objective is that at the end of the three-year project, the participants will be able to compare union density in each country.

The main speakers were the young participants from Brazil, but they also but they also invited activists and specialists in education, gender, communication and research. A whole afternoon was spent debating with Brazilian social movement representatives, all women. Although they are different, they walk together for more social justice in this vast country.

The moment of greatest emotion and convergence of international solidarity was the visit to the #LulaLivre vigil organized just a few metres from the prison where ex-president of Brazil, Lula, is unjustly detained. The young leaders marched to the place where numerous social and union organizations meet to greet Lula three times a day and demand his release.

On his 417th day of incarceration, participants shouted their "good afternoon" in three languages (Portuguese, Spanish and German) and wrote him a letter to let him know that young people all around the world support him.

After a week of numerous exchanges and debates, on the final day, each participant presented their union action plan or project, which would be implemented before the next meeting in 2020 in Germany.

The purpose of these plans is to organize and empower working youth, and to respond to the challenges faced by young people in their countries.

They also presented communication projects and campaigns against violence at the workplace, research and assessment projects about young people in Brazil, sports meetings for young people to attract them to the union and strategies to form youth committees in the unions.

“This exchange and training programme empowers young people so that they can act to renew and strengthen their unions. We focus on union practice and action. The commitments they all took on are inspiring,”

Photos from the week of exchange are in the photo gallery: 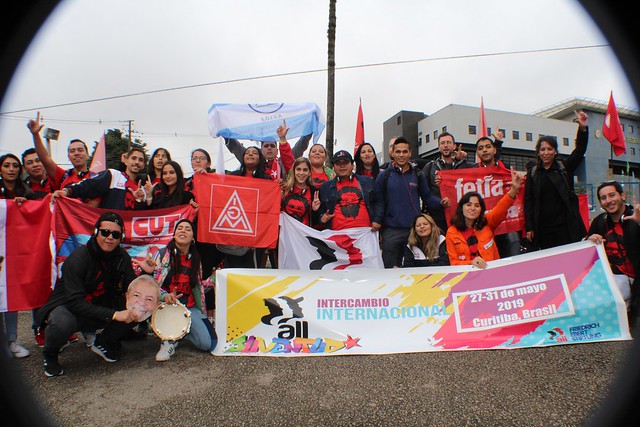