19 October, 2017371 members of the United Steelworkers – Syndicat des Métallos are entering their ninth month of strike action at the Glencore-managed CEZinc refinery in Quebec, Canada.

The dispute started on 12 February, when workers rejected the company’s plan to cut costs and increase productivity by raiding the pension plan. Despite the fact that the pension pot is over-funded with a 114 per cent funding ratio, the company wants workers to increase their contribution.

Despite the long strike, the company has not changed its position: on 3 October, 97 per cent of workers voted to reject the latest offer, which was essentially the same as the February offer. Other Steelworker locals have donated to a strike fund to help sustain the striking workers.

The union believes the company is trying to wear down the resolve of the workers through attrition. The workers are standing strong, but they really need support and encouragement. Please send a message to the company, telling them to negotiate in good faith.

CEZinc is a zinc refinery in Salaberry-de-Valleyfield, Quebec. It is part of Glencore’s Canadian zinc supply chain, which includes two mines. Glencore manages CEZinc, and has a 25 per cent stake in the company through the Toronto-listed Noranda Income Fund.

Glencore has a track record of attacking workers’ rights, and IndustriALL and its affiliates launched a campaign against the company in September. In May, a delegation of Métallos joined IndustriALL and Swiss affiliate Unia in a demonstation at the Glencore annual general meeting in Zug, Switzerland.

A delegation of Métallos is currently in Queensland, Australia, to build solidarity with 190 members of the Construction, Forestry, Mining and Energy Union, who have been locked out of Glencore’s Oaky North mine since June this year. Glencore is using contractors to do their work.

“Workers at CEZinc have a right to a decent retirement after a lifetime of hard work. IndustriALL will stand with the Métallos and continue to support them. We urge all our affiliates to send a message to the company today.”

Send a message to the company, telling them to negotiate in good faith. 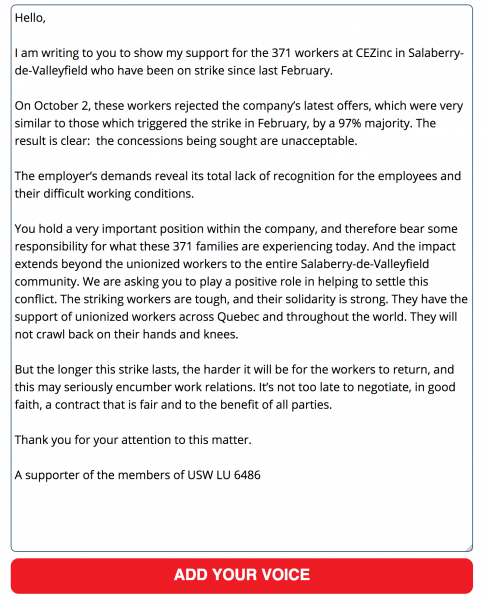