20 April, 2022After 37 years of struggle, Korean unionist Kim, Jin-Suk has been reinstated at the Yeongdo shipyard in Busan.

Kim thanked KMWU members for relentlessly fighting for her reinstatement, saying she hoped the landmark reinstatement would pave the way towards legislation giving access to justice and remedy for workers who suffered state-sponsored violence and unfair dismissals in the fight for democracy during Korea’s authoritarian era, from 1961 to 1987.

“During the military dictatorship, workers including our woman comrade Kim, Jin-suk persevered through state-sponsored violence, red-baiting, kidnapping, torture and unfair dismissal to fight for democracy inside the trade union. History has shown that fighting for democratic unionism was important for social change.

Though it will not bring the fallen comrades back to life, such as Park, Changsoo, Kim, Joo-ik, Kwak, Jae-kyu, Choi, Kang-seo, and Kim, Guem-sik, and the reinstatement has taken far too long, we are pleased that she made a history to enter the shipyard and eat together in the canteen with the shipyard workers for whom she sacrificed her whole life.”

Kim joined Korean Shipbuilding Corporation as a welder in 1981. After she and her co-workers protested against unsanitary food conditions and fought to reform a company-dominated union run by corrupt union officials into a democratic union, the company dismissed Kim in 1986.

When the company changed ownership to Hanjin Heavy Industries and Constructions (HHIC) in 1989, the new management still refused to reinstate her.

Even after her dismissal, Kim continued to stand in solidarity with shipyard workers, playing a pivotal role in challenging the company’s mass layoffs in 2003 and 2011. 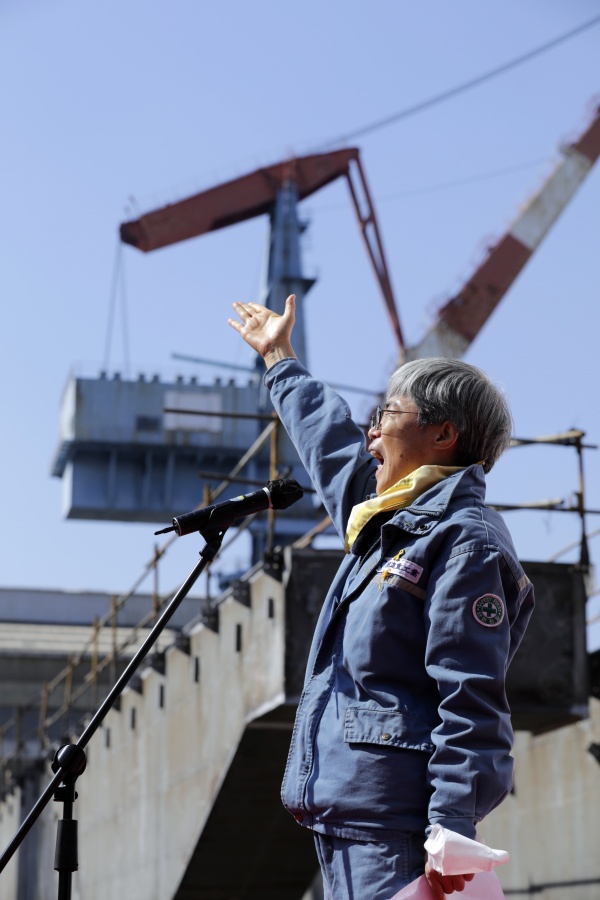 In 2011, Kim occupied a 115–foot shipyard crane for 309 days in protest of the layoff of 400 workers. Her bold action ignited the Hope Bus movement and led to the reinstatement of 94 union members.

In the winter of 2021, she embarked upon a 34-day march from Busan to Seoul to the office of the Korean President Moon Jae-in, to demand her reinstatement. The President did not respond to her appeal. Instead it was her fellow workers at KMWU Hanjin Heavy Industries Local who reached an agreement with the employer, HJ Shipbuilding & Construction (HJSC) on 23 February this year. As Kim has reached retirement age, negotiations on conditions will continue after the ceremony.

In addition to calling on politicians to enact legislation reforming the Korea Development Bank, in her reinstatement ceremony, Kim called on politicians to amend the Corporate Manslaughter Act to centre on surviving family and workers who lost their lives, enact a comprehensive anti-discrimination law covering LGBT, migrants, the disabled and women, to legislate for restoring the honour of other workers sacrificed in the fight for democracy and to intervene to resolve the issues of precarious workers at Asahi Glass, Asiana KO, the National Health Insurance Service, and Korea Expressway Corporation.

“Despite the long and winding road to reinstatement, the 37-year struggle for workers’ rights and dignity is remarkable and deserves a page in the history of the Asian labour movement. Thank you sister Kim, Jin-suk for what you have done for Korean shipyard workers,”