7 May, 2021IndustriALL affiliates in Latin America and the Caribbean have come up with a sector-based political and union agenda to promote regional reindustrialization, focusing on sustainable development and ensuring a fair transition to a low-carbon economy

In 2020, more than 150 union leaders from the base metal, energy and automotive sectors in Latin America and the Caribbean joined a series of seminars and working groups as part of a regional union empowerment project run by the Swedish organization Union to Union and IndustriALL.

In the second half of the year, they worked with academic experts to draw up a document setting out the main trends and possible scenarios for industry in the region over the coming years. They finalized the initial version of the document in December 2020 and will update it this year.

"We need to analyze what's happening now and what might happen going forward. We also have to be proactive in setting out a political agenda that pushes for reindustrialization in the region, with unions playing a political and social role in that process.

We need to bring political and productive powers and progressive governments together to address the changes that are coming. We also need to build sustainable industrial policies that bring hope to workers, to the millions of people who are unemployed, to migrants and to poor people across our region." 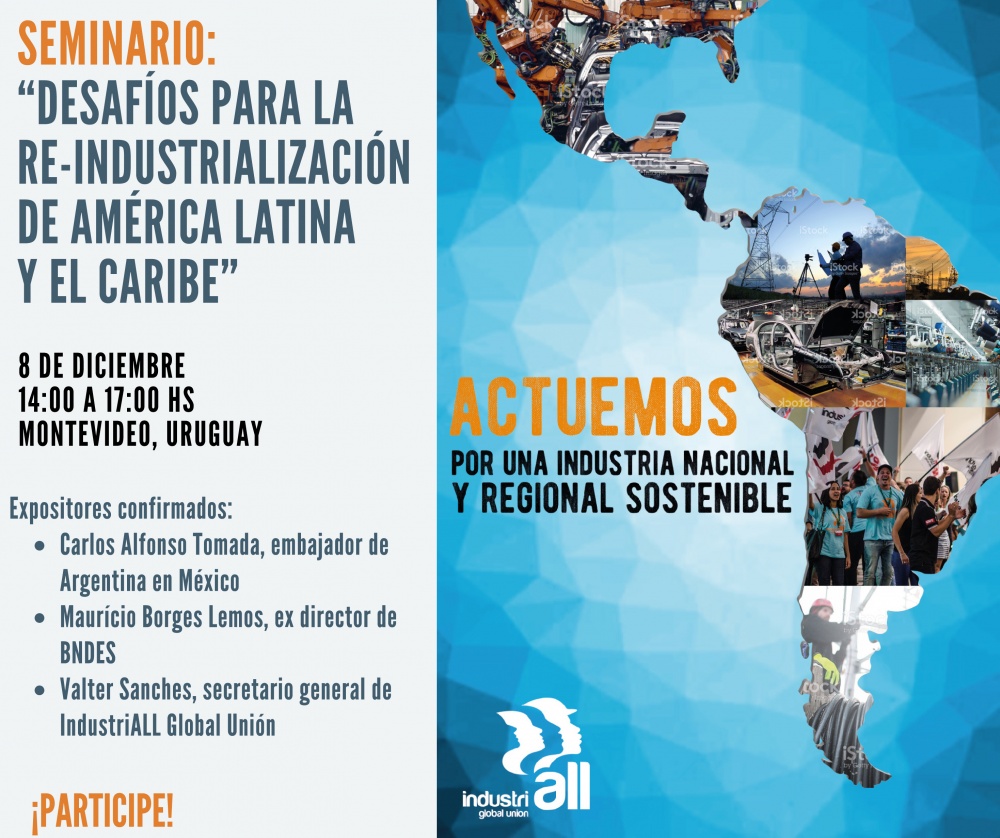 The threat of further deindustrialization in Latin America

According to Gabriel Porcile, director of the Uruguay office of the Economic Commission for Latin America and the Caribbean (ECLAC), the rise of neoliberalism in the 1990s was a major setback for manufacturing in the region. Industrial policies were cast aside, nothing was done to promote new economic sectors, hyper-globalization meant that decisions were made based almost exclusively on the market, and exchanges rates soared, which made imports cheaper. As a result, the proportion of value added that came from industry shrank considerably in the region, which had a serious knock-on effect on jobs.

"At ECLAC, we are concerned about the early deindustrialization we’re seeing in Latin America and the Caribbean. Our productivity relative to the rest of the world has fallen. You can only change your position in the world by industrializing, diversifying, bringing in industrial policies, and exporting industrial goods and cutting-edge tech products," says Porcile.

According to Porcile, Latin America has been hit hard by the pandemic-induced crisis, with GDP falling by 7.7 per cent on average, and this has exacerbated inequalities considerably. That’s why he does not have a very positive outlook, although the outcome is still open. Previous crises have shown that hyper-globalization doesn't work, that the market doesn't correct itself and that very robust policies are needed in order to successfully weather crises.

"The pandemic enhanced the role of the state and public-sector investment in the recovery process. At ECLAC, we’re pushing for a major shift towards socially, environmentally and economically sustainable development. Economic sustainability means making investments that will make the region truly competitive and having formal, high-quality strategies for industry, the tech sector and job creation. And for the environment, the idea is to use public-sector investment to boost private-sector investment and promote sustainable production and spending, while transitioning to a low-carbon economy. [...]

It's also important to take a multilateral approach and create rules that protect the majority against the interests of a powerful few and that foster a dialogue with industrial players and civil society. This will create spaces in which social security and development policies can evolve. [...]

ECLAC is calling for a change in the conversation and a new social contract that sets out different roles for the market, the state and civil society. There needs to be space at the table for workers and non-governmental organizations so that they can be involved in creating sustainable industrial policies, leading to a shift in the balance between the state, the market and society."

What is the unions' proposed agenda for Latin America and the Caribbean?

According to the experts and union leaders from the base metals sector, trade and capacity utilization tend to dominate the conversation in Latin America's steel industry, with other issues getting left aside. Trade can be a major driver of prosperity, but that can only happen if there is a fair and equitable global framework.

They said that unions should oppose tariffs that are indiscriminate, unilateral and unfair, as these can trigger trade wars, which in turn can be a real threat to jobs. Countries are entitled to use norms-based trade solutions to safeguard local industries against unfair competition.

To strengthen the region's industry and ensure it remains competitive, they said that unions needed to promote a sustainable regional industrial policy that includes a clear regulatory framework, provides for investment in the energy transition, creates industrial clusters, and strengthens the region’s capacity to attract and retain a highly qualified local workforce. For them, it is essential to create spaces for national debates involving business associations and government to create a socially, economically and environmentally sustainable sector.

The workers and experts from this sector said that energy was a fundamental universal right. They also said that it was essential to ensure that the energy sector was safe, socially responsible and sustainable and allowed for sustainable industrial policies to be implemented. Major infrastructure would be needed for the energy transition, which is why unions needed to demand that governments and companies invest in the sector’s future.

They said that it was essential to shift to a low-carbon economy. This process should be aligned with the public interest, based on inclusive and fair criteria and conducted in compliance with employment rights and the concept of energy as a fundamental right. The sector was concentrated in the hands of multinationals companies, and distributed generation could be one way of resolving this.

They said that unions should ensure that all stakeholders were involved in drawing up national energy policies – not only to ensure a transition to cleaner energy but also to create equitable policies. A comprehensive approach was needed to anticipate and mitigate the effects of low-carbon strategies and ensure a fair transition for workers and their communities while also avoiding any risks.

Union leaders and experts from the automotive sector suggested creating platforms for local and regional dialogue with governments and companies so as not to get left behind in the implementation of technologies and the creation of infrastructure.

They said they would seek to enhance lithium’s added value and enter the electric battery supply chain, as those batteries would be key components of future vehicles and were becoming ever cheaper to produce.

The main challenges for Latin American unions from this sector are to continue strengthening the organization of workers from all supply chains and building union networks. Union in the automotive sector will work to foster alliances so that they can influence the dialogue alongside business leaders and governments and help to build industrial policies geared towards reindustrializing Latin America. They will seek to work with both the public and private sectors in order to enter the digital automotive industry in a less polluting way.