11 December, 2020IndustriALL Global Union’s Middle East and North Africa region met online on 10 December to take stock after a challenging year. Many of the issues faced in the region - high unemployment, conflict, and a poor economic outlook - have been made worse by the Covid-19 pandemic. 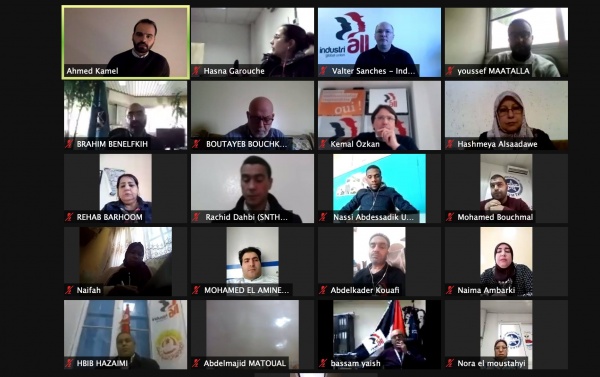 Introducing the meeting, IndustriALL vice-president Abdelmajid Matoual noted that although the pandemic has created a gloomy short-term outlook for the region’s workers, it is too soon to predict the consequences. The pandemic also gives as an opportunity to reflect:

“We need to change the way we think,” he said, “the way we organize. We need to work in new ways to build unity – strong unions that will stand together to defend workers’ rights.”

IndustriALL general secretary Valter Sanches said that Human Rights Day is an opportunity to reflect on defending human rights, particularly as the pandemic has led to global attacks on workers. The health crisis is leading to an economic crisis.

“Pandemic profiteers – particularly companies like Amazon, and the big bosses of the gig economy – have made a fortune out of the pandemic”, he said. “Unions must fight for stimulus money to build a green recovery.”

Assistant general secretary Kemal Özkan noted that it is ten years since the eruption of the Arab Spring:

“That moment gave us so much hope for the future, for freedom and democracy. Instead we have had turbulence and conflict, and for many countries, the situation is worse now than it was ten years ago. The one bright spot is the growing strength and unity of the region’s trade union movement.”

Özkan noted that the Middle East and North Africa is the most conflict-ridden region in the world. It has a growing population, with high unemployment, and a poor economic outlook which is too dependent on the export of fossil fuels.

Delegates reported that the pandemic has made organizing more difficult than ever, with repression of protests and arrests in some countries, and lockdown restrictions throughout the region. Many private sector companies, including engineering, automotive and aerospace firms in Algeria, Tunisia and Morocco, have laid off or failed to pay workers.

However, there are also bright spots: in Jordan, the textile union JTGCU started tripartite negotiations with government and employer representatives at the start of the pandemic. The agreement they reached secured jobs, wage levels and health coverage for workers in the sector, many of them migrant women. In Palestine, the textile union was able to reach a similar agreement after starting negotiations within a week of the country reporting its first coronavirus case. In Morocco, the phosphate union SNTP-CDT won a Covid bonus to mitigate the impact of the pandemic, and in recognition for their efforts in maintaining production.

Another bright spot was the position of women. Many delegates reported that they had succeeded in increasing the representation of women in companies and in their unions, as well as defending women’s positions in society. Hashmeya Alsadawe of Iraq reported from the women’s committee.

Main image: In Iraq, Basra Gas Company workers protest this summer against the non-payment of wages