1 June, 2016The spread of production tied to multinational corporations (MNCs) worldwide has driven employment growth in many countries. And it has brought new challenges to the union movement. How can MNCs be held accountable for labour rights violations in their supply chains in the absence of global rules and enforcement mechanisms?

The International Labour Organization (ILO) estimates that the number of jobs linked with global supply chains in 40 countries increased from 296 million in 1995 to 453 million in 2013. This represents more than one fifth of the global workforce. For many workers, jobs in global supply chains mean precarious work, low wages and inhuman working hours.

The expansion of global supply chains has been driven by a business model expressly designed to take advantage of low wages and inadequate regulation and enforcement. Research shows that respect for workers’ rights in supply chains is declining.

In the garment industry, there was a 73 per cent drop in the workers’ rights score of the top 20 apparel exporters to the US between 1989 and 2010. At the same time there was a 42 per cent reduction in the price paid for the clothes they produced.

The UN Guiding Principles make it clear that MNCs are responsible for working conditions in their supply chains. Yet many MNCs claim to have little control, or even knowledge, of how much workers are paid, the hours they work, their health and safety or their employment contracts. But these same companies are able to make very specific production demands of their suppliers over what materials are used, where those materials come from, production processes, delivery times and so on.

In fact, the sourcing models designed by companies to maximize their profits are the direct cause of many of the abuses experienced by workers. Short lead times, last minute changes to production specifications, ramp-ups for new product launches and general lack of consideration of how sourcing decisions impact on workers are major impediments to improving workers’ rights in global supply chains.

Workers at all stages of global supply chains can justifiably ask why their pay and conditions are so poor. They are making products or contributing services for companies that rake in massive profits and could well afford to guarantee all workers in their supply chains a decent standard of living.

In the last quarter of 2015, Apple reported the biggest quarterly profit ever by a corporation: US$18.4 billion. It is sitting on cash reserves of US$216 billion. Meanwhile, workers who make products responsible for generating these unprecedented profits receive only US$4 for making an iPhone 6 that retails in the US for US$649.

Amancio Oretga, founder of fashion- chain, Zara, is now the second richest man in the world with a personal fortune of US$70 billion (yes, billion).

MNC buyers at the top of global supply chains may not directly employ workers in the factories that produce their goods, but their purchasing decisions have a powerful influence over wages and working hours. 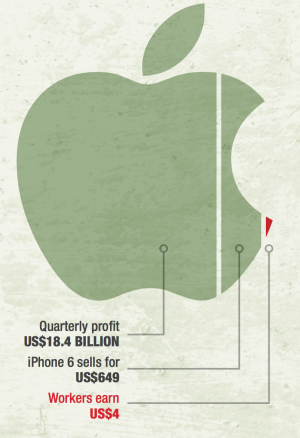 The failure of CSR

Unilateral, voluntary and nonbinding corporate social responsibility (CSR) efforts have overwhelmingly failed to improve wages and working hours, or to ensure respect for workers’ right to join a union.

CSR has spawned a multi-million dollar social auditing industry, which means that despite the lack of results, there is so much invested that many companies will hope to achieve incremental change through improvements to existing approaches.

But since the compliance and auditing model focuses on individual factory performance without identifying and addressing root causes and systemic barriers, these efforts will continue to be ineffectual.

There is growing public awareness of the lack of results delivered by CSR programmes – flashy websites and reports are no longer an adequate smokescreen behind which companies can continue business as usual. Faith in the auditing model was further shaken when it became known that social auditing and certification bodies SAI and BSCI gave clean bills of health, respectively, to the Ali Enterprises clothing factory in Pakistan before it burnt down killing 254 workers and Rana Plaza before it collapsed, killing 1,134 workers in Bangladesh.

WHAT OPTIONS FOR UNIONS?

The UN Guiding Principles and the OECD guidelines that are based on them clearly establish that MNCs are responsible for abuses in their supply chains. Unions can take cases under the OECD guidelines but this does not lead to binding resolution and results are patchy.

While it is generally not currently possible to sue companies in their home countries for their actions in other countries, there are some movements towards legal requirements on MNCs. In France, a draft law is under discussion which will require the largest French multinationals to put in place a due diligence plan to prevent harm to human rights and the environment. Companies failing to produce such a plan can be required to do so by a judge and fined for non-compliance.

Meanwhile there are efforts at the UN Human Rights Council towards a binding international treaty on corporate human rights responsibilities.

Unions will be pushing for the International Labour Conference discussion on Global Supply Chains in June 2016 to lead to concrete measures to address violations of international labour standards in MNC supply chains (see box).

In line with its strategic goal of confronting global capital, IndustriALL continues to take steps towards increasing the accountability of the MNCs in the supply chains of the industries it covers.

IndustriALL has signed Global Framework Agreements with nearly 50 multinational corporations. These require the corporations to uphold workers’ fundamental rights, and they generally include a commitment that the corporations’ suppliers do the same.

Some unions are developing closer relationships with other unions present in their employers’ supply chains. Affiliates of IndustriALL and sister global union, International Transport Workers, in Denmark, Norway and the UK are planning to systematically build their unions’ links across the oil, gas, maritime and transport sectors.

The aim is to build union power through communicating, collaborating and organizing across the supply chain.

Unions can use brand names of companies to push for workers’ rights in supply chains.

The ITUC recently released a report exposing the scandal that 50 leading brand name multinational corporations directly employ only 6 per cent of their workforces. The remaining 94 per cent often suffer from low wages and rights violations, hidden in the shadows of global supply chains. ITUC calls on these brand name companies to take responsibility for their “hidden workforces”.

Naming and shaming companies with retail exposure can be especially powerful. While employers in IndustriALL sectors frequently do not have retail exposure, they are often linked through supply chains to companies that do.

Unions at mining and metals giant Rio Tinto have indirectly pressured the company by publicly linking jewellery retailer Signet to the poor practices of its diamond supplier Rio Tinto.

IndustriALL Philippine affiliate MWAP at first had little success in negotiating a new labour agreement in 2014 with electronics company NXP in the country. After NXP attacked the leadership of the union, focus shifted to NXP customer Apple.

Together with MWAP, protests at Apple stores were organized. A petition set up with SumOfUs calling on Apple to demand its supplier NXP improve its labour practices gained 150,000 signatures. The result was a new labour agreement for MWAP.

The collapse of the Rana Plaza building in April 2013 marks the turning point away from the failed CSR auditing model and towards global supply chain industrial relations. It made possible the Bangladesh Accord on Fire and Building Safety, a groundbreaking legally-binding agreement between global unions and more than 200 garment MNCs.

The Accord identifies and addresses the underlying reasons why factories had not been made safe despite years of auditing and CSR programs. It includes commitments by brands towards their supplier factories to maintain orders and to ensure that financing is available to factories to do the necessary renovations. If factories do not comply, signatory brands are required to end their business relationship.

The Bangladesh Accord promises to change forever the way that companies deal with abuses in their supply chains. The challenge now is to build on this model to address other systemic violations of labour rights in supply chains.

IndustriALL has signed a Memorandum of Understanding with a number of leading brands in the garment industry. The aim of the agreed process, known as ACT,

is to establish systems of industry-wide collective agreements supported by brand purchasing practices as the primary means of wage-fixing in the global garment industry. The MoU is explicit in identifying the development of industry bargaining in garment producing countries as essential to achieving living wages and the need

for effective recognition of workers’ rights to freedom of association and collective bargaining in order for this to be realized.

In the context of global supply chains, where the buyers at the top of the supply chain have the greatest power to influence where value is distributed along the chain and how much of it ends up in the hands of workers, reform of purchasing practices in support of industry bargaining is essential.

By linking national industry-level collective bargaining between unions and employers to the purchasing practices of brands, the ACT process creates a framework for genuine supply chain industrial relations. Through industry bargaining, workers can get a wage that is enough to properly support themselves and their families, and at the same time the specific nature of the industry, working hours, productivity and other issues that have bearing on wages, can be addressed.

For the first time, the ACT process aims to create a system that, by addressing the structural barriers to living wages, has a genuine chance of increasing garment workers’ wages in a way that is scalable, sustainable and enforceable.

Drawing on these experiences, and those of the Bangladesh Accord, there is no reason why similar models cannot be developed to address other labour rights problems that are entrenched in the way that supply chains are constructed and managed.

This is the opportunity that unions now have to address working conditions in global supply chains, towards genuine supply chain industrial relations.

In June, the ILO will hold a discussion at its International Labour Conference (ILC) on how to promote decent work in global supply chains. The ILO is the tri-partite organization tasked with setting standards for the world of work. The ILC is organized annually by the ILO to make decisions about the ILO’s general policy, work programme and international labour standards.

The global economy currently suffers from an accountability gap. Many companies claim to uphold workers’ rights in their supply chains, but fail to take measures necessary to ensure those rights are respected. Governments take little responsibility for workers’ rights at their companies’ suppliers abroad. The countries where those suppliers are located often have laws to protect workers’ rights but are not able or willing to enforce them.

The UN and OECD have taken steps to address this accountability gap. In 2011, the UN endorsed its Guiding Principles and the OECD updated its Guidelines.

Now workers, companies and governments will discuss a way forward in the ILO.

WORKERS WILL ALSO PUSH FOR:

The employers’ group is expected to take a different approach to the ILO supply chains discussion, portraying global supply chains as an important tool for economic development and downplaying violations of workers’ rights in supply chains. Employers are likely to resist any measures that put demands on them for greater transparency, accountability or improved conditions for workers.

To ensure that the discussion at theILO leads to increased supply chain accountability, unions must be ready to pressure their governments to support the workers’ group’s proposals.