7 January, 2021A new report commissioned by IndustriALL Global Union demonstrates the gap between rhetoric and reality as major energy companies fail to back climate commitments with investment.

The report, Energy transition perspectives and trends: patterns, scenarios and impacts, was carried out by Ineep, a Brazilian union-backed research agency specializing in the energy industry. Researchers subjected the corporate strategies, investments and market performance of the major energy companies to in depth scrutiny, as well as interviewing union members who work at the companies.

The report measures corporate strategy against the language on Just Transition included in the 2015 Paris Agreement and Silesia Declaration at COP24, and considers information from the International Energy Agency. It maps the current energy mix, and makes predictions about the future, by company and by region.

A trend that is immediately apparent is the gap between corporate rhetoric about greening the future and investment. Most energy companies have embarked on major public relations campaigns, sometimes entirely rebranding themselves, with language on energy transition. But the report shows that even Total, the company that has invested the highest proportion, has only invested 4.5 per cent of its capital expenditure in renewables. Most other companies have invested half or less of that amount.

This information is based on data from 2019. The coronavirus pandemic and volatility of the oil price has accelerated investment in renewables, but there is no clear evidence of a change to the overall trend. 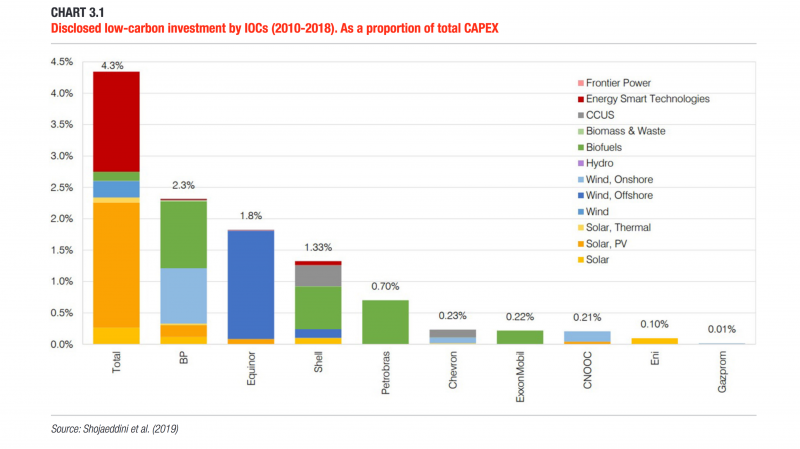 A regional breakdown shows that in the EU – which has the most developed policy environment – companies have invested more in transition. Chinese and Russian companies have invested least. The report predicts that despite the electoral defeat of Donald Trump, the US is likely to largely maintain its current, fossil fuel-dependent energy policy.

Companies are spreading their renewables investments – in effect, hedging their bets on potential futures - while expecting to continue making the bulk of their income from fossil fuels. Transition strategies are contested within energy companies, as demonstrated by the recent departure of Shell executives due to frustration with the slow pace of energy transition.

The report shows current and projected employment in the renewable sector, with breakdowns by region and by energy source. There is no guarantee of quality jobs: by 2050, two thirds of the expected 25 million renewables jobs will be in solar, while most of the remainder will be in onshore wind. But the bulk of these jobs will be in the manufacture of components, and in construction and installation. There are expected to be about five million jobs in operation and maintenance, most of them blue collar.

Interviews with union members show that companies have largely failed to communicate with their workforce about energy transition.

“This report shows that energy companies are investing in marketing, not in renewables. They intend to continue with business as usually until they are forced to change by external circumstances.

“Unless we act now to become part of the decision-making process, this will have very painful consequences for workers. We need to insist that companies lay out clear energy transition plans that meet the requirements of the Paris Agreement, and that they communicate these plans to their workforce. They need to open ongoing negotiations with unions to manage this transition and ensure that skills and jobs are retained.

“We also need to maintain pressure on our political representatives to plan and legislate for a Just Transition.”