16 June, 2022On 7 June, the International Trade Union Confederation (ITUC), LO Norway and IndustriALL held a second workshop on wind technology as part of the Just Transition and the energy sector initiative. The initiative provides a platform for unions around the world to exchange information on energy transition technologies and the jobs, skills, markets, investments, and emissions related to them.

Workers want good jobs and just transition in the energy sector. This workshop looked at offshore and onshore wind technology, which employers and government see as a potential pathway for oil and gas companies to diversify their assets and bring down emissions. The information is not always easy to get but unions want to see how many jobs there are, when they will come, what kind of jobs they will be, what kinds of skills workers will need for these jobs, and the transition that workers will be faced with.

To get a better view of what the future holds, participants looked at the value chains of oil and gas, and onshore and offshore wind, breaking both value chains down to production, processing, distribution, and end-use (upstream, midstream, downstream). 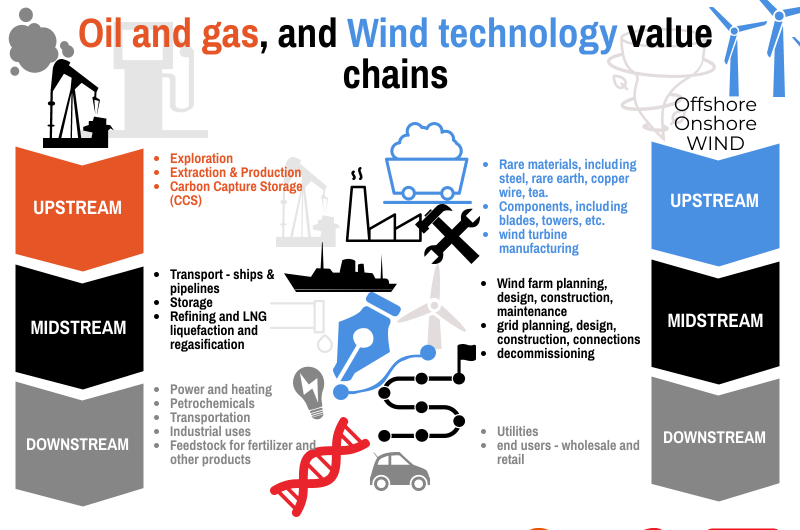 According to Michael Brenner from the International Renewable Energy Agency (IRENA), the wind sector employs approximately 1.3 million workers globally and ranks amongst the top five renewable technologies in terms of workforce.

“Gender balance is quite poor in the sector, mainly due to access to education, hiring practices, discriminatory workplace policies and a lack of flexibility,”

“This is an indication that unions have work on public policy when it comes to gender equality and bringing youth into these emerging sectors.”

Brenner explained that new installations drive jobs in the wind sector, as they in turn drive jobs in construction, manufacturing, and project design. But long-term employment is determined by the installations that are in place and that create the jobs in operations and maintenance. Since wind technology is not that new and many installations are reaching the end of their life, there are also potential jobs in dismantling and recycling of old wind turbines.

Restrictive spatial planning and other polices make wind technology difficult to bring into some countries. The lengthy process for securing permits for new wind farms has a major influence on the technology developing further and in many countries there is a need for strategic industrial policy.

In the UK, the focus has been on lowering costs, in particular labour costs. Component production is outsourced and some of the offshore vessel crews use cheap labour from abroad. Capital expenditures are what drive jobs in the supply chain and construction. A recent study showed that only 29% of capital expenditures on UK offshore wind projects are spent within the UK. If you include development cost and maintenance and operations, that rises to 48%.

In comparison, Denmark, a much smaller country, has a much more complete domestic supply chain and is home to major turbine manufacturers like Vestas. Danish companies have an estimated 40 per cent of the European offshore market, primarily in operations and maintenance, but also installations.  The number of jobs that Danish companies can create in and outside of Denmark is significant.

Ole Philipsen from Dansk Metal presented the Danish model; a highly unionized workforce that have managed to secure quality jobs in the wind sector, demonstrating that unions are crucial in ensuring that workers get quality jobs in the is transition.

The industry’s equipment manufacturing footprint is a big factor affecting where jobs are created. It determines a country’s abilities to establish a strong local domestic supply chain and the ability to implement and to upgrade and update power grids to feed wind electricity into the grid.

Manuel Riera from UGT In Spain, reported that the UGT and CCOO have put together a manifesto, in view of the potential for wind technology in the country. They have involved companies in the sector, ports and shipyards in the value chain, universities, and research institutions. The manifesto is an attempt to be ready in view of the emerging wind technology, unions want to be prepared and make sure that workers and communities will be part of the discussion.

Lebogang Mulaisi from COSATU reported that South Africa relies heavily on oil, gas, and coal for energy, but there is a rush for clean energy. There is potential to develop wind powered energy and to organize workers in this new sector.

“Wind technology is piloted in South Africa and studies show conflicting results. But there is hope that this technology will create many jobs, especially if there is local manufacturing. Our demand is to have public and worker ownership, including through worker cooperatives,”

The country reports gave a snapshot of how the technologies are developing in each country and to what extent unions can be a part of the transition. While regional challenges are different, participants drew from the examples to better prepare for the future.