18 January, 2022Shipbreaking has been called the most dangerous job in the world. In countries like Bangladesh and Pakistan, workers face dangerous and precarious working conditions, with very little training, safety equipment and access to medical services. For this, they receive poverty wages.

The industry has a responsibility to provide, and workers have a right to expect, safe, healthy, clean and sustainable jobs. One way to achieve that is through the Hong Kong International Convention for the Safe and Environmentally Sound Recycling of Ships.

The Convention aims to ensure that, when being recycled, ships do not pose unnecessary risks to human health, safety and to the environment. It addresses issues like hazardous substances such as asbestos, heavy metals, hydrocarbons and ozone-depleting substances, and concerns about the working and environmental conditions at many of the world's ship recycling locations.

The Convention itself does not provide specific space for organizing, but clearly states that education and training, especially on occupational health and safety, is crucial.

“This has to be developed not only together with the employers, but also with the workers. We want to use this and help unions to motivate workers to join; the Convention can be used to increase membership, and bring the unions opportunities to develop social dialogue with the government and employers,”

says Kan Matsuzaki, IndustriALL assistant general secretary who has worked with the shipbreaking sector since 2010.

From a technical perspective, to come into effect the Convention needs

With a large proportion of shipbreaking taking place in Bangladesh and Pakistan, ratification by these countries is important. And there is movement in the right direction; in 2018, Bangladesh that recently became the world largest shipbreaking country, set up a new ship recycling act, which mentions that the country will ratify the Convention by 2023.

“There is progress, but we need to accelerate the process of ratification as there is a constant stream of serious accidents and the occupational health and safety situation is disastrous. There is a strong demand to make shipbreaking safer and sustainable. Shipowners and stakeholders want their ships to be recycled in safe and environmentally friendly ways. In the end, countries that haven’t ratified the Convention will lose business,”

“We expect the Hong Kong Convention to fulfil its requirements for effect by 2023 and it will set out a minimum and first step towards creating a level playing field for a sustainable future.” 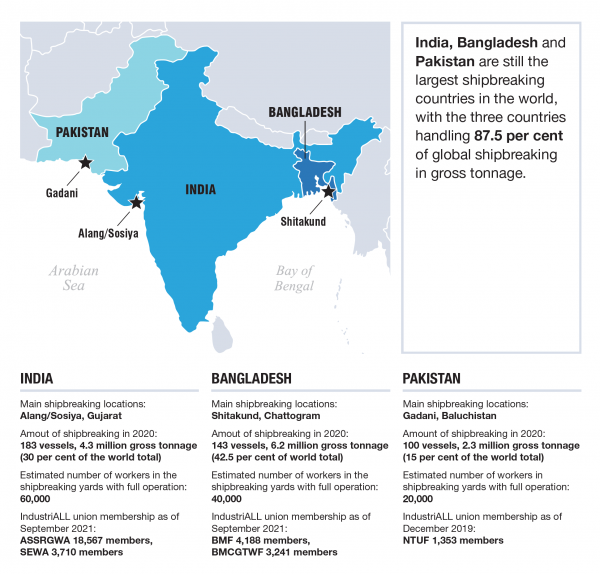 IndustriALL has run an organizing project among shipbreaking workers in India since 2003. Funded by Dutch FNV, the project started in the yards in Mumbai as IndustriALL affiliate SMEFI already had union membership in the neighbouring shipbuilding yard, providing easy access to the workers. From the start, the organizing drive met with strong resistance from the employer, union busting was rampant and the police refused to help when the mafia got involved.

But the organizers refused to give up and kept informing workers of their rights, that their lives were important and that the union can help to make the work safer. With a union identity card, the workers could not only identify themselves, the card also told the blood type, crucial information in case of an accident.

In 2006, the organizing drive was expanded to Alang, at the time the world’s biggest shipbreaking yard where working conditions were harsh. Again, the employer and local government tried to resist the union organizing.

Before the project started, the majority of the workers in Alang were poor, undocumented, informal workers, contracted by agencies. If a worker died, his body would simply be thrown into the sea. But through the project, a union was formed, The Alang Sosiya Ship Recycling and General Workers Association (ASSRGWA). The union has contributed to improving wages, social security measures and occupational health and safety. With the union identity card, workers can now claim social insurance and open a bank account, and the union has a record on what worker works where. Occupational health and safety education and training materials developed by ASSRGWA-FNV-IndustriALL are now widely used by the yard owners and the local authority, Gujarat Maritime Board-GMB.

India ratified the Convention in 2019. Since India started complying with the standards of the Convention, facilities have been upgraded and safety has improved.

There are more than 100 shipbreaking yards in Bangladesh, but only one fulfils the requirements of the Convention. There is no final recycling system; hazardous materials are either dumped somewhere or kept in the yard until proper facility is built. But the government has promised to build recycling systems right before or right after the Convention is ratified.

Where ships go to die

Sometimes labelled worst of the worst, IndustriALL affiliate NTUF is organizing workers and try to increase conditions and social benefits through social dialogue, with the employer recognizing the union as a negotiation partner.

The Hong Kong International Convention for the Safe and Environmentally Sound Recycling of Ships was adopted at a diplomatic conference in 2009.

Regulations in the new Convention cover: the design, construction, operation and preparation of ships so as to facilitate safe and environmentally sound recycling without compromising the safety and operational efficiency of ships; the operation of ship recycling facilities in a safe and environmentally sound manner; and the establishment of an appropriate enforcement mechanism for ship recycling, incorporating certification and reporting requirements.