Why a Just Transition Initiative for the energy sector now?

The energy sector plays a critical role in national, regional and global economies. National and international energy companies have provided millions of organized jobs in the past and energy sector revenues are key for national budgets.

Geopolitical conflicts, growing instability, strategic competition, and security threats have made some countries reassess their energy systems; from importing fossil fuels to speeding up growth of all forms of clean energy. Energy security is a critical issue that, combined with climate concerns, is accelerating efforts to develop clean energy with secure and domestic supply chains.

According to the International Energy Agency (IEA), the energy sector employs about 65 million people worldwide (around two per cent of the global formal workforce) in

While projections show significant growth in jobs in a transition to clean energy, no single clean energy technology or activity will involve as many jobs, and as many quality jobs, as workers have in today’s oil and gas sector. While today’s jobs in oil and gas are among the best jobs in the economy, so far jobs in new clean energy companies are often lower quality than fossil fuel jobs, with some employers hostile to unions.

In 2022, the International Trade Union Confederation (ITUC), LO Norway and IndustriALL Global Union collaborated on a global union initiative on Just Transition in the Energy Sector. The initiative aims to ensure that the union movement has the information, tools, and plans to get good jobs and Just Transition for energy workers.

The initiative provides a table for unions around the world to exchange information, examples and strategies. It is an opportunity to listen to experts on the renewable technologies that are set to replace and create jobs in the energy sector. It has also explored the potential for a new, tripartite process led by the UN and focused on Just Transition in the energy sector, starting with oil and gas.

A Just Transition leaves no one behind

Just Transition is a term coined by the trade union movement, referring to policy needed to secure workers' rights and livelihoods when economies shift to sustainable production. The goal is that the transition must be as fair and inclusive as possible, creating decent work opportunities and leaving no one behind.

The pandemic and the energy crisis have propelled Just Transition to one of the most important priorities, accelerating the need for unions to have a seat at the table before industries shift with only the interests of governments and capital.

Many countries have plans to invest in clean energy transition technologies, but there is no guarantee that a move to these technologies will keep and create good jobs. Companies unilaterally invest in energy transition, leaving workers out of the process, but are not investing enough to attain the commitments set by the Paris Agreement. 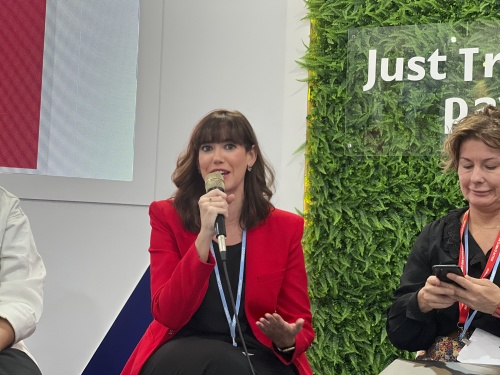 “Trade unions are not satisfied with efforts by energy companies so far. Existing collective bargaining, climate target-setting, and responsible business initiatives are not getting enough results,”

Lives and livelihoods at stake

What does Just Transition mean for the refinery engineer in the US set to lose his job next month, as the refinery will close?

What does Just Transition mean for the gas extraction engineer in Denmark who has just found out about the cancellation of latest round of gas extraction licensing due to government climate goals?

Workers in fossil fuel industries are often portrayed as resistant to clean energy, but the resistance is more often driven by uncertainty about what happens to traditional energy jobs. Climate change has a direct impact on communities and on workers’ livelihoods in these communities. 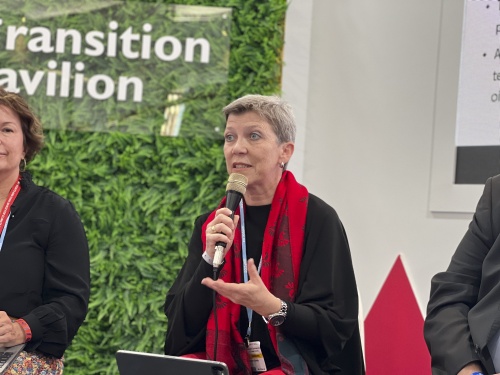 “Unions must be present on the ground, on national and on international levels to make sure that Just Transition is dealt with not only in the global north, but throughout the supply chain,”

Global unions represent workers throughout the supply chain, and building climate resilience into supply chains requires that workers be involved, especially if no one is to be left behind.

There is no single industry that could replace the oil and gas industry in terms of jobs and income. Unions are studying multiple technologies when discussing about where jobs are moving to. The Just Transition and the Energy Sector initiative looked specifically at

Breaking down the value chains from production, processing, distribution, and end use (upstream, midstream, downstream) provides a clearer view of where the jobs are and where there is a future for workers in renewable energy technologies.

Workers in fossil fuel extraction are highly skilled, with skills applicable to the growing renewable sectors. This is particularly true in oil and gas, where there is transferability and real potential for unions to tap into.

Gender balance is poor in the renewables sector, with women representing only 30 per cent of the workforce due to gender stereotypes, lack of access to jobs, education, hiring practices, discriminatory workplace policies and a lack of work-life balance. Strategies and programmes addressing the effects of climate change must include the participation, experiences, and voices of women.

Unions must address cultural and social norms, as well as structural barriers that stand in the way of gender equality. The gender pay gap and the undervaluation of women’s work are still lacking from conversations on Just Transition.

Trade unions need to build power and alliances with civil society – feminist, youth, communities, racialized, indigenous and environmental organizations. Unions must ensure that their structures are representative of the entire workforce they represent, not only the male workers. All workers must benefit from equal opportunities and equal treatment. They must also defend the rights of the communities they are part of and integrate them in the planning of a Just transition.

What does a successful Just Transition look like for workers? Trade unions must ask if a successful outcome only benefits male workers. Have women, disproportionally under-represented in male dominated sectors like energy, been considered. What about racialized or indigenous workers over represented in precarious and outsourced work? 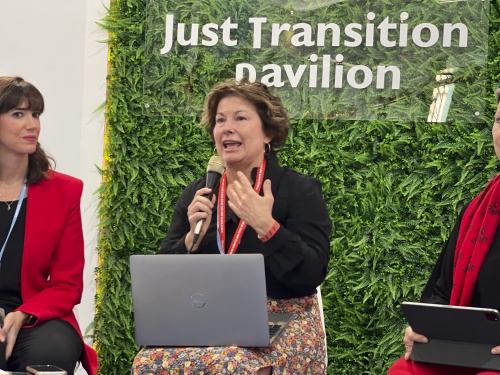 “Clean energy jobs are for everyone. The next phase of the Just Transition initiative plans to include gender and racial justice issues to a greater extent and explore what the union movement can do to make sure more women, racialized and young workers get good jobs in clean energy and most importantly, join unions,”

Energy sector unions and national confederations have mobilized on the issue of good jobs and Just Transition. Their members are experiencing both changes to jobs and job losses, as well as new organizing opportunities due to decarbonization.

Good examples of Just Transition are usually found in countries with high union membership and where unions have been involved early on. Therefore, unions must make sure that they are prepared. Inclusivity and taking advantage of organizing the new jobs that the transition brings is key for achieving a successful Just Transition for all workers.

Workforces across the world face different challenges and there are significant gaps in the industrial capabilities between country’s different transition pathways. It is a messy and complex picture withno one size fits all when dealing with a Just Transition.

Though many jobs in the oil and gas sector have high skills transfer to clean energy jobs, this is not universally true. The transition will require skilling and reskilling. Similarly, newer technologies such as hydrogen raise new health and safety issues that will require new OHS regulations and skills. Even older technologies, like solar panels require more attention to skills and OHS, as there is currently not enough focus on risks such as falls and high voltages.

Renewable energy has pushed businesses to transform their operations and supply chains to meet record demands for clean energy. But the renewable energy sector supply chain especially the solar, wind and battery ones, face criticism over human rights violations. Legislation is developing quickly as a response.

Companies have a significant role to play in Just Transition; they can no longer make surface changes, they have a duty to make real efforts to achieve sustainability goals, and simply not cosmetic changes to tick Environmental and Social Governance (ESG) criteria check boxes.

Due diligence is discussed on national and international levels – from the European Commission’s proposed a Directive on Corporate Sustainable Due Diligence, and discussions on a UN Treaty on Business and Human Rights, to Japan’s Council of Metalworkers’ (JCM) guide on Trade unions’ role and responses to human rights due diligence, submitted to the parliamentary vice-minister of economy, trade and industry (METI).

The most advanced due diligence initiative that we have seen so far is the German supply chain legislation, the Lieferkettengesetz. From 1 January 2023, workers and their advocates will be able to sue German companies in German courts for environmental and human rights breaches, including breaches of workers’ rights.

A successful Just Transition includes taking responsibility for supply chains and human rights due diligence laws will be instrumental. Workers need to be involved to make sure that due diligence doesn’t fall short of expectations.

These developments have created a moment in time where unions have an opportunity to build the table that we will sit at.

If businesses fail to implement due diligence measures throughout their supply chains, especially in the renewables sectors there will likely be consequences on their business, as investors, customers and financial institutions are developing human rights-related requirements applicable to everyone that they do business with.

The joint initiative between the ITUC, LO Norway and IndustriALL comes at an important moment in time when unions must reclaim Just Transition. It cannot be hijacked by capital as a tool to tick their ESG boxes. It is ours, and to achieve it we must be at every level of the discussion because workers are in every level of the supply chain.

Overview of what is happening globally around Just Transition